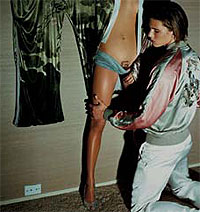 Gucci marks the spot with a G in their latest press campaign, model Carmen Kass* is pictured pulling down her knickers and showing off body hair shaved into the letter ‘G’.

Mario Testino shot the image he calls ‘Pubic Enemy’ and it’s displayed in Vogue’s February edition. Some people have called the image ‘vile, coarse and degrading to women’.

The Advertising Standards Authority in the UK, which has the power to ban offensive material, said it was investigating after receiving a number of complaints.

Gucci boss Tom Ford is used to this kind of attention, he was behind the controversial images of model Sophie Dahl in the Yves St Laurent Opium perfume campaign two years ago. It became the most complained about ad in the ASA’s history. Also he sells perfume with full frontal male nudity.

John Beyer, director of Mediawatchuk, called for an immediate ban of the image;

“The companies involved clearly release these kind of pictures to create as much publicity as possible, but it’s a thoroughly unpleasant and irresponsible tactic. We can’t simply ignore them.

Imagery showing young women in this way is extremely harmful to society, and should not be appearing in mainstream magazines.

The ASA has a duty to ensure that advertisements are decent, and this clearly isn’t. It’s deeply offensive and should be banned immediately.”

A spokesman for Gucci lets us know: “All our important players are in Milan at the moment and nobody is around to speak about the picture.” Toasting in grappa, for a controversial stunt well done, I’m sure.

Note: Sunday 19/01-03 the Times [uk] reported this model to be Louise Pedersen and not Carmen.