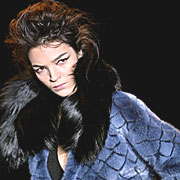 The 42-year-old’s farewell collection at YSL is the high point of the week of winter ready-to-wear shows in Paris, which ends Tuesday.

Ford gave his final show for Gucci on Feb. 25 in Milan to thundering applause, saying goodbye under a shower of rose petals. Another of his most recent high-profile creations was seen a week ago on Oscar night — the nude, beaded dress warn by South African star Charlize Theron, honored as best actress.

However, Ford lost out in contract talks with the two houses’ parent company Pinault-Printemps-Redoute. He now dreams of directing movies.

Still, the show must go on, and Valentino’s collection Sunday was superb. It featured elaborate, beautifully tailored clothes and a touch of the naughty for evening wear.

The collection recalled the decadent Berlin of the 1930s — a la Marlene Dietrich — starting with a lovely black tuxedo coat cut close to the body, paired with a white oxford cotton shirt and white cashmere tie.

White and black appeared in dressy, sometimes sexy outfits, like tight black cocktail numbers open at the chest or an evening sheath with lace insets at the hip and a deeply dipped back decollete.

Much was to covet here. The houndstooth and glen plaid looks in slim skirts or wool jackets with touches of cashmere were great for daytime. Giraffe and pony prints made wool jackets and coats look dressy and fun.

Fans should love the flared black pants with white pleated overblouse, or the slim trouser outfits with glitter on the white ties.

Valentino’s favorite red appeared in a lovely strapless flared taffeta long gown with a fabric rose at the hip. A gold pantsuit with knitted sweater, brown sable collar, gold lace bra and satin trousers was daring rather than shocking.

Mixed-print flowing chiffons and lovely tulle gowns with pleated tiered skirts all made for beautifully wearable party clothes, the specialty of eternally suntanned Valentino Garavani, darling of the well-heeled yacht and jet set.

Fur was thrown on with abandon, from the occasional sable collar to fox-edged purple or green boleros to fox and mink over slinky outfits — something the anti-fur organization PETA would abhor.

People for the Ethical Treatment of Animals made an appearance outside Revillon’s fur collection Sunday with activists — “fashion victims” — wearing furs spattered in blood-red colors falling to the ground to the sound of gun shots.

But it was Ford’s show for YSL at the Rodin Museum that had everyone holding his breath.

It was not clear who would take over as designers for YSL and Gucci. Ford is to stay on until the end of April, when PPR buys the outstanding 30% of Gucci, but his final public bow is Sunday night.

Serge Weinberg, who heads parent company Pinault-Printemps-Redoute, said last week that the new chief executive and design team is to be named this week. They will replace Domenico De Sole and Ford.

Questions about the new Gucci team have hovered above PPR since November when the group announced that Ford and De Sole’s contracts would not be renewed.

Ford told Women’s Wear Daily in an interview published Friday that money was not the source of the breakup.

“Money had absolutely nothing to do with it. It was about control,” he was quoted as saying.

After 10 years in fashion, Ford says he is looking for a change. He told WWD that he thinks of directing movies and has signed with Creative Artists Agency.

“I am very serious about wanting to make a movie …. I am actively looking for a project.”

However, he added that he first needs to think.

“All I know is that I need to get to my ranch in New Mexico and spend three or four months riding my horses and just being alone.”