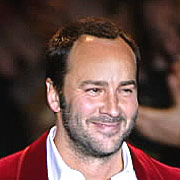 NEW YORK (AP) — Tom Ford, who has presented his farewell collections for Gucci and Yves Saint Laurent, is getting a plaque on one of the world’s most famous shopping streets.

Ford is the second recipient of the Rodeo Drive Walk of Style Award, to be presented Sunday in Los Angeles. Giorgio Armani received the inaugural award, which salutes designers who successfully blend style and entertainment.

“I don’t think of this as a lifetime achievement award, maybe for my lifetime in fashion, but not my whole life,” he said in a recent interview.

The 42-year-old designer, who rose to cult figure status with his revival of the Gucci label, is stepping down as creative director of Gucci Group.

He lost out in contract talks with the two houses’ French parent company, Pinault-Printemps-Redoute, and now dreams of directing movies.

Peri Ellen Berne, chairwoman of the Walk of Style committee, said Ford’s selection had nothing to do with his departure from Gucci or the industry.

“Pretty much right after Giorgio Armani, we knew it would be Tom Ford,” she said. But, Berne added, “We’re thrilled that we can pay tribute to him in our own special way.”

Ford was selected by a committee of merchants, landowners and hoteliers from a nomination list submitted by a group of academics, fashion and movie insiders.

“Tom Ford is quite a natural for this,” Berne said. “We honor those whose contributions to fashion and Hollywood are parallel. This is indicative of Tom Ford’s impact on the industry.”

Ford, who will split his time between homes in Los Angeles and London, laughs a little at his own wardrobe. “I wear almost the same thing every day, a dark suit and a white shirt. For evening, a velvet jacket, a white shirt and dark trousers. It’s almost a uniform.

“Fashion is the last thing I want to think about for myself.”