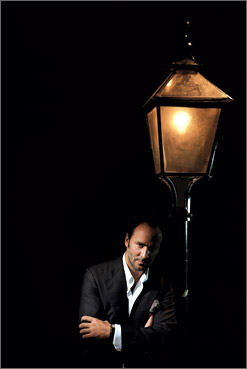 I’m sitting in the fumoir in Coleridge’s waiting for Tom Ford, who loves this exclusive corner of London’s most exclusive hotel. Uncharacteristically, he’s late, but I’m not surprised. After all, he and his partner, Richard Buckley, are still moving into their new town house nearby, in Mayfair, and two days after our meeting they’re hosting a wedding party there for friends. Ford arrives, looking not at all like a man who’s been unwrapping crockery or knocking nails into walls. In fact, he looks as he always does- immaculate. It has been about a year since I saw him, and it’s great to see that he has all his familiar style again. The last time we talked was just after he had completed the marathon job of putting together a book of images from his Gucci years, and he just seemed exhausted. Now he’s sparkling like a piece of crystal.

He orders a Coke, and within seconds we’re talking about the fallacy of overwashing. Things have been so hectic at Casa Ford that he has gone for a couple of days without popping into the tub. “When Richard and I are out riding in Santa Fe”- where we have a ranch- “we often go for maybe three days without washing,” he confides. “I like the odor of a man, and in any case we all overscrub. I used to have like three baths a day, for relaxation rather than cleanliness. But my dermatologist in L.A. has convinced me not to wash my face so much. It destroys the oils.” I’m looking for a telltale twinkle (he is good at sending himself up), but he seems to be serious about this. I need hardly add that the only odor coming off Tom Ford is his delicious yet-to-be-named new men’s fragrance.

It’s not only washing that has changed since he left Gucci in April 2004. “My routine is weird now,” he says. “I don’t sleep well, probably because my days are much less structured than they were at Gucci. Sometimes I stay up until five or six in the morning and then sleep till noon. Other days I’m up and awake at five. It’s a lot easier to be flexibly when you don’t have 2000 people working for you, I must say. I’ve had time to do some serious thinking.” That thinking ha resulted in (among other things) the agreements he and his business partner [and former Gucci Group president and CEO] Domenico De Sole signed in April with Estee Lauder and eyewear company Marcolin to create new ranges for them, both reportedly multi-million dollar deals. The Tom Ford Estee Lauder Collection debuts this month, and includes Ford’s modernized, amber-infused reinterpretation of the company’s classic Youth Dew fragrance, as well as a limited-edition makeup collection called Amber Nude that is so luxurious and sexy, and focused on glamorous, glossy nude and bronze shades (some infused with 24-karat gold) that are designed to suit almost every skin tone. Ford’s namesake beauty brand, also developed with Lauder, will debut next fall, and the sunglasses will be unveiled in December. “It means I’ll be working much harder than I have recently,” he accepts, adding, “so many people asked me why I did the deal with Lauder. I can tell you why. It’s a company I respect creatively and, with a percentage minimum for the life of the contract, it puts me in a financial position that I don’t think any other designer has ever been in. I’m starting my own label in- menswear only, at first- and this licensing deal for fragrances and cosmetics-eyewear as well -more than pays for the total full startup so that my own business will be more profitable from day one. And I’m spending none of my own money.”

It seems like a classic Tom Ford formula. When I remind him of the many times he told me he would never start an eponymous business, he smiles and nods. “I know, I know,” he agrees. “But things change. I completely own the company that Domenico and I have set up with the Lauder money. He is very much a part of it all, although not involved in the day-to-day running. He puts the deals together and is always there if I need him, although I actually haven’t seen him for a while. It just seems right to have my own name now.”

Tom’s return to fashion is no real surprise, and neither is his decision to begin with menswear. “Although I love fashion and miss it a lot, I’m not ready to commit to womenswear yet,” he tells me.