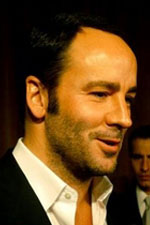 He’s not a movie or rock star (at least not yet), but Tom Ford, whose rise to fame came in the ’90s as creative director at Gucci and later, at Yves Saint Laurent Rive Gauche, is clearly the closest thing that the fashion world has to such a personality aside from say, Karl Lagerfeld.

If Ford and Lagerfeld are the biggest stars in fashion, then last night, Fifth Avenue was the ultimate red carpet, with Ford making an exclusive personal appearance at Saks Fifth Avenue, to launch his new Tom Ford Estee Lauder limited edition makeup and fragrance collection, while Lagerfeld was on hand to celebrate the opening of the new Fendi flagship just three blocks away.

To go with “Amber Nude,” the Tom Ford Estee Lauder collection’s namesake, a nude colored carpet was rolled out for Ford’s arrival. A round of cheers and applause broke out as he strode from the entrance to the rear of the store, where a minimalist Lucite table flanked by white flowers, long curtains and a female staff of attendants wearing cream-colored ensembles had been set up for him to receive fans in a grand manner.

Estee Lauder estimated the crowd to be over 1000, the largest turnout for a launch at Saks Fifth Avenue in New York. Customers had been lined up for hours waiting to meet him and to have one of the products from the new collection signed by Ford.

“The transition from fashion to beauty was natural for me because both celebrate the beauty of women,” said Ford, who plans to launch an eponymous cosmetics line next fall (with Estee Lauder’s backing) as well as a Tom Ford men’s wear collection with business partner and ex-Gucci CEO Domenico de Sole. Both resigned from the Gucci Group in 2004. Last night’s launch, as well as a presentation of a new sunglass collection for Spring 2006 last week at a trade show in Paris, marks Ford’s return to the fashion limelight.

Ford and the Estee Lauder company announced their partnership this past spring, the first time that Estee Lauder has collaborated with a fashion designer. So why Tom Ford?

Evelyn Lauder’s words of admiration for Ford were something akin to a teenager’s crush. On the choice of Ford she answered with gusto, “Because he’s hot! Because he’s cute, he’s got a tremendous fashion sense, he loves to dress women, he loves to fix women up. He tells me, I need a different pair of eyeglasses, how to do my hair a certain way. He’s terrific, and people trust him. He is very creative.”

Ford’s trademark style – oozing with sex appeal – comes with the golden combination of his star status coupled with acceptable levels of edginess, making him a good choice for a company looking to appeal to a younger customer for whom “Sex and the City” is a bible.

“He’s an American fashion icon, and the association with Estee Lauder, the American beauty icon, is a match made in heaven,” said John Demsey.

“I feel like I stepped through the fountain of youth!” exclaimed Richie Rich of Heatherette about entering the Ford lair at Saks that evening. “I feel totally youthful already. I love Tom Ford, though. He has such a mysterious quality to him, but when you get down to it, he’s just a homegrown boy like Traver [Rains] is. He’s just so cool. He’s so down-to-earth and nice. Carolyn Murphy [star of the Youth Dew Amber Nude campaign] and I were just talking about how he reeks that sex appeal, like whether you’re a boy, girl or in-between.”

So was Estee Lauder ever concerned that Ford would ever cross into controversial territory with them?

“No, not at all!” said Evelyn Lauder. “Why would he be controversial, he’s adorable!”

Aerin Lauder noted that when her grandmother first came out with Youth Dew, the fragrance that Ford updated as Youth Dew Amber Nude, the campaign “was very controversial. It was a nude [woman], it was a black and white photograph, and I think he’s kind of created that same buzz for the brand that she created with Youth Dew when she first launched it.”

While the showman in Ford may opt for stylized, sexy imagery in the ad campaigns he creates – after all, that’s what creates hype and buzz for a product – the Amber Nude makeup collection itself is the opposite of theatrical. Instead, it epitomizes Ford’s philosophy of natural beauty – using makeup to enhance what your mama gave you.

It’s a neutral collection consisting of creamy nude lipsticks flecked with gold shimmer, a bronzer, a nail polish, and a few shimmery, earthy eye shadows. The most popular product so far seems to be the eye gloss, a transparent black shadow that gives the eyes an instant smoky effect. And because it’s a gloss, there’s no danger of raccoon eyes that heavier dark powders can create if not applied correctly. It’s no wonder that it sold out at Saks at the event and now has a waiting list.

“I do really quite like a natural beauty,” Ford told Fashion Wire Daily as he made his way back to the VIP cocktail party being held at Saks in his honor, after meeting hundreds of fans. “I like them when it looks relaxed enough that they’re touchable. It’s funny, someone was waiting in line and they said, ‘Are you going to do a lip liner?’ and I said, ‘No! I hate lipliners!’ I hate that, like, hard line. I just don’t like it.”

“I don’t necessarily mind artifice,” he continued, “but I like artifice to make you look like an enhanced version of reality.”

The ability to take nature and improve upon it in such a way that hand of the manipulator virtually disappears is perhaps the ultimate task of anyone involved in the beauty business today. Ford’s supporters like Estee Lauder and Vogue’s Andre Leon Talley are confident that his move from fashion to beauty will be an unmitigated success. Judging by the positive reception for his Amber Nude collection at Saks last night, he appears to be on his way to another conquest.

“Tom Ford is a genius,” said Talley. “He’s a dazzling superstar. And for me, anything he does is way beyond the stratosphere of style. It’s beyond fashion. He has impacted upon our culture and our times with his point of view, which I find unique and wonderful and so strong, and so brilliant. Like Andy Warhol, you can only be great when you are yourself, and that’s what Tom is.”

Now, it’s just a matter of waiting to see how that point of view will translate itself to the silver screen, Ford’s next major amibition.

The look that Tom made Ford: Santa Fe has always been home
Scroll to top