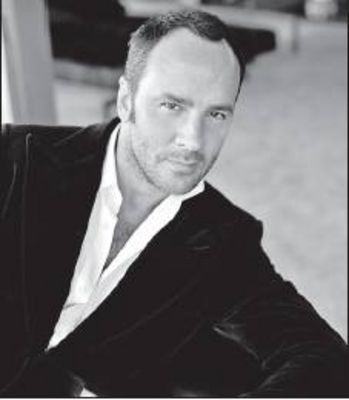 Fashion designer Tom Ford was born in 1961 in Austin, Texas, and began coming to Santa Fe as a child to visit his grandmother, Ruth Bibo.

His father, also named Tom Ford but with a different middle initial, used to own Chaparral Realty. The elder Ford continues to live in Santa Fe. Ford’s mother, Shirley Burton, now lives in Texas, but returns often to visit her son, who estimates he spends three to four months each year in Santa Fe.

The Fords moved to Santa Fe when he was 11 years old. He attended Santa Fe Preparatory School, and in 1979, left to attend college at Parsons School of Design in New York City, where he spent much of his time there observing celebrities at the Studio 54 nightclub and traveling to Europe.

In 1990, he joined Gucci, where he rose to creative director and then vice president. He also became creative director of Yves Saint Laurent and is credited with turning the companies’ fortunes around. He now is working on a line of beauty products for Esteé Lauder and looking for film projects to direct.

Ford, dubbed “the King of Cool” in one online biography, is known for strong, sexy designs. He sports facial stubble and partially unbuttoned shirts. Critics have suggested Ford is good at marketing, not design. He has responded that being labeled commercial is a compliment because “it means it looks great and people want it.”

Ford spoke to The New Mexican about the mansion he is planning to build atop Talaya Hill by telephone this week from his penthouse suite in the Carlyle Hotel in New York, where he was registered under a pseudonym.

Question: Why the secrecy?

Answer: In places like London and Los Angeles, I’m extremely well-known and it’s pretty standard practice to buy property — a lot of people do it — in the name of … different companies. … I knew at a certain point we would want to approach the neighbors and talk to them about what we are planning on doing. … I’m a very private person, and it’s also one reason that I bought that property. It is at the end of a road, and as I explained to the neighbors who were concerned that they were going to see our house, in an ideal world, I would love it if you didn’t see our house at all, and that’s one reason I am building there.

Question: Why this site?

Answer: I have a house in town now which is on the other side of Talaya Hill, which is where I grew up. I’d rather not give my address. … I had been looking for a great place in Santa Fe for quite a while and just hadn’t found anything that was right and then saw that piece of property. … I had also sort of hated to leave my current house because, as I said, I grew up in it, so the views are really the same I’ve been looking at since I was 5 years old. … I can almost see my chimney from this piece of property. … It really feels like home already. That entire neighborhood is home to me.

Question: What have you proposed that isn’t required by city ordinances?

Answer: There are a lot of things that we’re not necessarily required to do by law, but that we’re trying to do. We’re working on pulling back the house. We’re contemplating taking a bay off the garage to reduce it in size because of some of the neighbors’ concerns. … Our ranch outside of town is being designed by a Japanese architect, Tadao Ando, as a very contemporary building, so, in town, what we wanted was a very traditional adobe home. … We’re trying to integrate the house into the site as well as possible to make the planes of the house not rigid and to let them step forward and step back in the roof line. … We’ve actually dug down the inside of the house.

Question: Do you plan to spend more time in Santa Fe?

Answer: I’ve always thought of Santa Fe as my home. It’s a place that even when I’m not there, I think in my mind when I close my eyes to go to sleep, it’s really where my home is. … It’s not so easy to be a fashion designer in Santa Fe. It’s easier in New York or London or Paris, but as time goes by and I have the freedom to do it, I’d love to spend more and more time in Santa Fe and ultimately live there full-time at some point in my life. I love Santa Fe. I think it’s really one of the most beautiful places in the world, and one of the things I do love about it is the architectural unity of the city and the fact that it does have a strong architectural look and presence that you don’t really so often find in America.