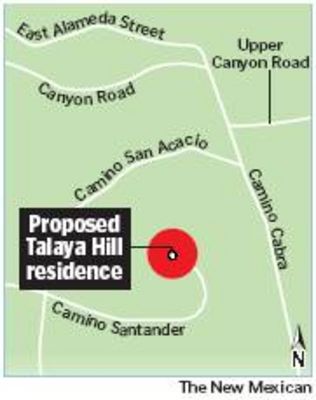 Fashion designer Tom Ford plans to build an adobe mansion atop Talaya Hill, reviving attention on a vacant lot that a decade ago was the focus of a fight over hilltop development .

The privacy-conscious 44-yearold , who grew up on Santa Fe’s east side before rising to the top of the fashion world, bought the 10-acre lot last year through a corporation, Angus Buckley LLC — named for his companion of 20 years, journalist Richard Buckley, and their 3-year-old fox terrier, Angus. the city for a house with a footprint of more than 17,000-square feet and a swimming pool, Ford acknowledged he is behind the project at the east end of Camino Santander.

“I haven’t tried to be particularly secretive about it,” he said. “But you don’t want to advertise where you live. If you’re a public person, you don’t necessarily want people to know what you’re doing.”

The property’s previous owners, Wall Street investor Paul Tierney and his wife, Susan, fought with Ford’s lawyers and other agents initially declined to confirm he owned the company. But this week, after submitting plans to neighbors and elected city officials over plans to put up a 8,000-square-foot house and separate garage there in the 1990s. The city and its insurers ended up paying the Tierneys $300,000 in 1996 to drop a federal lawsuit. And four years of legal challenges by the San Acacio Neighborhood Association finally ended in 2000 when the New Mexico Court of Appeals tossed out the neighbors’ lawsuit .

But the Tierneys dropped their plans in 2003 and put the property up for sale for $1.7 million .

In anticipation of similar struggles, Ford and his agents have approached their project carefully, meeting with neighbors and seeking to minimize descriptions of the project’s size.

For example, an application to the Historic Design Review Board, which is set to consider the project’s exterior design next month, says the total roofed area of the house is 17,147 square feet — about the size of the Palace of the Governors. But Ford attorney Janet McKay said this is an inaccurate description because the footprint includes an interior courtyard covered by a pergola with open beams. If the courtyard, portales, a small basement and a garage with a caretaker suite are subtracted, she said, the main house measures 10,600 square feet. When its double-adobe walls are excluded, she said, the house is only 8,512 square feet.

Ford said he needs a large house to accommodate his parents , his sister and her children who often visit him. He already owns the east-side home where he grew up, plus a ranch with an orchard and vineyard near Galisteo where he is building a house. He also has homes in Los Angeles and London.

Unlike other hilltops that have been the focus of debates over preserving ridgelines from development, the Talaya Hill location is not pristine. The new house, garage and swimming pool would be built within a “bowl” that was shaped in the late 1800s to hold a small reservoir that provided water pressure to surrounding homes.

However, neighbors in the past have objected to the idea of a large house that would look down on their homes.

“Due to the visual sensitivity,” wrote Los Angeles architect Leo Marmol in a letter to the Historic Design Review Board, parts of the one-story , Spanish-Pueblo-style house will be 5 feet below grade and no part will rise more than 14 feet above grade. He said the earth-toned adobe walls will be “shaped by hand to appear textured and undulating” and will be “created by use of paja” — or adobe with extra straw. Eight-foottall mature evergreens will be planted every 15 feet of linear wall space to shield the house from view, Marmol wrote.

Even though city regulations do not require early-neighborhood-notification meetings for single homes, Ford and his representatives have been meeting with neighborhood groups to explain their plans. Ford said he already has made some changes to accommodate neighbors’ concerns. But some neighborhood residents are still wary.

“I wish that we could save these hilltops,” said Mary Jean Cook, who lives next to Ford’s lot. “In that Tom grew up here, I was hoping he might feel that way, too.”

Cook, who with her husband, Edward, put their historic home up for sale for $15 million three years ago, said she regrets Santa Fe did not block development on Santa Fe’s main promontories years ago. “This one is so visible from the whole town,” she said. “People are going to shocked who are going to see this — everybody. It’s quite a grand palais.”

Peter Shoenfeld, vice president of the San Acacio Neighborhood Association, said he has suggested making the structure less visible by altering the garage, moving the main house back from the brow of the hill and reducing its overall dimensions .

“Those should not be objectionable changes to Tom Ford, who has said he did not buy the property for the view but instead bought it for its privacy,” Shoenfeld said. “So we’re hoping there will be some modifications .”

Richard Ellenberg, a director and treasurer of the Canyon Neighborhood Association, said the rectangular house on the oval-shaped reservoir appears to “pierce the berm” in places. Although the design might shield the house from view of people directly below it, he said, it will be highly visible to residents of Apodaca Hill, Wilderness Gate and other east-side neighborhoods.

Ellenberg said when he met with Ford’s agents, they told him they could not show him the interior-floor plan, with each room labeled, because of Ford’s desire for privacy. “It’s the first time I’ve sat down with a bunch of architects and not have all the plans sitting there,” Ellenberg said.

Ford attorney McKay said neighbors have a right to know what the exterior of Ford’s house will look like, but “we don’t want people to know where his bedroom is.”

Ellenberg said more needs to be known about Ford’s plans, and he is considering organizing a public hearing on the project. The lawyer, who worked on land-use cases in Georgia, also wants to study how the plans fit the city escarpment ordinance, which limits construction on ridges.

Ford’s agents, Ellenberg said, have indicated the federal court order in the Tierney case exempts their client from the escarpment regulations. “Everyone seems to assume there’s something in that order that allows it to be built on the ridge top, but no one knows that yet,” he said. “So that needs some explanation.”

Ford says he welcomes the scrutiny.

“I know these things can turn into quite an issue in Santa Fe, and I just wanted to make sure that everyone had the right information,” he said. “We’re trying to work with everyone that we can to try to make everyone as happy as they can be. I know some people would love not to see anything built on that site. But it is a site that’s got a legal building lot, and it’s a very beautiful site, and we’re trying to make our house disappear .”