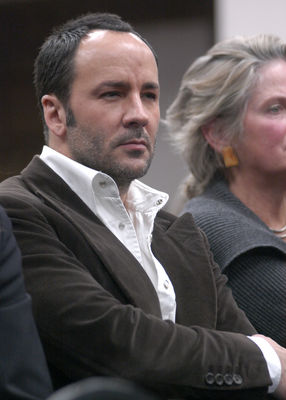 Fashion designer Tom Ford says he’s redesigning his proposed mansion on Talaya Hill in response to comments from his neighbors.

Ford told the Santa Fe Historic Design Review Board on Tuesday that after seven meetings with neighbors, he has agreed to decrease the footprint of his proposed residence from 17,147 to 16,467 square feet, eliminate one garage bay and make other changes.

But he asked board members to make other suggestions so when his home is finished and new landscaping is in place, the 10-acre site “will be more beautiful than its current denuded state.”

Ford, 44, grew up in Santa Fe, attended Parsons School of Design in New York City and quickly rose to prominence as a designer with Gucci and Yves Saint Laurent . He attended Tuesday’s hearing in his trademark outfit — a white shirt with its top buttons open, dark sports coat, jeans and cowboy boots.

The board agreed to postpone voting on his proposal until Feb. 14, after a meeting at which 10 people spoke — six with objections to the plan and four in favor of it.

East-side resident Carolyn Sigstedt Stephenson asked Ford to refrain from building on the site and instead create a conservation easement there like Sally Wagner has done to land directly adjacent to Ford’s property.

Stephenson and Peter Wolf, an officer in the Canyon Neighborhood Association, called on the board to cancel Tuesday’s hearing. He said Ford’s agents had notified the association two hours before the hearing that it would be canceled, so many critics of the project decided not to come.

But Jennifer Jenkins, a planning consultant for the project, said she meant only to indicate that no vote would be asked of the board Tuesday — and discussion of the plan could continue.

Joan Baker, Lorraine Rotunno, Kevin Dobolsky and David Padwa called on the board to approve Ford’s plans, calling him an asset to Santa Fe. Padwa called Ford “one of the greatest stylists” and said the world media would lampoon the board should it reject his house plans for “not having a sense of style.”

But east-side resident Art Roth called on the board to downsize the house and said Ford’s proposed residence was “a Wal-Mart perched on a hill” and “a battleship cresting on a wave descending down into Santa Fe.”

Santa Fe architect Rad Acton suggested Ford’s Los Angelesbased architect, Ron Radziner, drop the floor elevations at the perimeter of the house, shift the structure to the south, step back the house from the perimeter berm, break up the massing by detaching the garage and guest quarters, and downsize the entire plan.