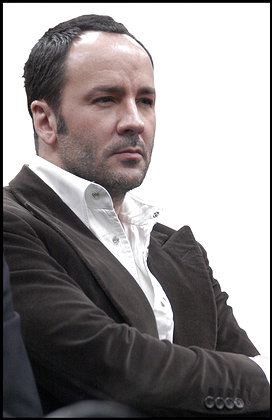 Anyone who has ever seen designer Tom Ford — formerly of Gucci and Yves Saint Laurent — knows he firmly believes in establishing a public style and then sticking with it. Thus it is nearly impossible to find a photograph of him in which he is not attired in his signature uniform: black suit and crisp white dress shirt, typically unbuttoned to mid-chest. In those same photographs, he stares intently into the camera, neither smiling nor snarling. He is quietly brooding but never frowning. A picture of him from this year is virtually indistinguishable from one taken in 2000.

This week, however, Ford was spotted wearing a brown blazer — a departure from form so startling it was like stumbling across Tom Wolfe wearing track pants instead of his iconic white suit.

Designer Tom Ford, stylish in brown, plans to rework his plans for a house on Santa Fe’s east side after objections from his neighbors.

Designer Tom Ford, stylish in brown, plans to rework his plans for a house on Santa Fe’s east side after objections from his neighbors. (By Natalie Guilln — The New Mexican)

* ‘Evita,’ Trying Hard to Be Populist

This aesthetic temblor originated in Santa Fe, N.M., where the designer has become involved in a brouhaha over a house he would like to build there. The uproar is a familiar one. Neighbors who would like to preserve the understated charm of their surroundings are fighting the wealthy property owner who wants to build a very large dream home. Ford is no Santa Fe interloper; he grew up there. But according to stories in the Albuquerque Journal and in the New Mexican, his local roots did not stop residents from taking issue with his proposal for an adobe house situated on a hilltop. The original plans called for an estate measuring more than 17,000 square feet, including a garage, a guest apartment and most certainly an impressive amount of closet space for all of those black suits. This week Ford agreed to rework the house.

For his meeting with neighbors on Monday, Ford wore a dark brown blazer and a white Western shirt, as well as jeans and cowboy boots. In photos, he appears to be squinting, but his brow remains fashionably unfurrowed.

There have been only a few other notable exceptions to Ford’s black-suit rule. For his final show at Yves Saint Laurent — the fall 2004 collection — he took his runway bows in a scarlet velvet smoking jacket and white shirt. And this year, he wore only his birthday suit for a fashion story in the November issue of W magazine. The smoking jacket read like a celebratory flourish. The nudity came off like an uncomfortably public display of insecurity and angst.

The brown blazer, however, perfectly exemplifies how a signature style can be reworked so that the distinctive sensibility and character remain the same while the details send entirely new signals.

When Ford is dressed in familiar black and white, the stark contrast suggests the designer has stepped out of a glamorous, glossy photograph. The look conveys formality but not stuffiness. It is sexy and timeless, not flashy. The suit itself could slip unnoticed into any boardroom. The crispness of the shirt conveys the wearer’s attention to detail. And all of that exposed chest makes clear that this is not just any old executive but rather one who deals in sensuality, bravado and immodesty.

(Ford’s signature style spawned a flurry of imitators, the most egregious of which was Jonathan Antin, the mercurial hairstylist who starred in the Bravo show “Blow Out.” Antin even spoke in Ford’s distinctively languorous honey tones.)

Yet it is still a tailored jacket. And with its high and wide lapels, it is gutsy and fashionable. The style is polished and precise. And those are working buttonholes on the sleeves. A pricey detail. So go ahead and approach, but don’t get too close.

The white shirt is crisp but doesn’t look as severely starched as usual. The shirt snaps instead of buttons and has Western seaming across the chest. It appears to have barrel cuffs instead of French ones. (Although that is a bit unclear since only the standard inch or so of shirt cuff is visible rather than the four or five inches that Ford often likes to let flop out.) It’s not a fancy shirt. But it is not a working man’s shirt either, not with those snaps that look as though they have been inlaid with mother-of-pearl.

Ford is not being ostentatious. But he’s not dressing in denial of his fat bank account either.

Ford still has his shirt unbuttoned. The sex appeal is part of Ford’s charm. And when the neighbors are in a tizzy over one’s proposed mansion, it’s good to be as charming as possible.

The designer astutely safeguards the public image he has crafted. (He’s planning to launch a signature collection of menswear next year.) He hasn’t slipped into a costume in order to create a more empathetic presence. But within the narrow confines of his well-documented style, he has offered his version of casual and welcoming, concerned and sensitive.

Ford hasn’t been digging through some politician’s semiotics war chest. He isn’t trying to make his case in a pullover sweater or with his shirtsleeves rolled up to the elbows to underscore his earthy sincerity.