THERE was a lot of excitement at Isetan KLCC recently.

However the buzz had nothing to do with the fact that it was Christmas week and or the fact that people were busy with their last-minute shopping.

In fact, the crowd were anticipating the arrival of Tom Ford’s Estee Lauder collection.

The entire floor was teeming with people who heard about the launch of the Limited Edition products and were waiting to sample them. 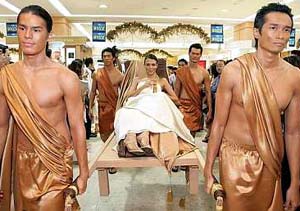 And they were not disappointed as they also viewed a spectacular launch gambit of the products featuring male models in toga carrying a golden palanquin.

Seductively reclining on the palanquin was a female model holding the new fragrance by Estee Lauder called Youth Dew Amber Nude together with the Amber Nude Limited Edition Makeup collection.

There was a rush to purchase the products however the Face Gloss and The Bronzer from the limited edition make-up collection was snapped up quickly.

Estee Lauder announced the collaboration with Tom Ford in April 2005.

Estee Lauder spokes model Carolyn Murphy is featured in the sensual advertising as a reclining nude reminiscent of the nude in the original Youth Dew advertising from 1953.

Youth Dew Amber Nude fragrance will remain in the Estee Lauder line up, however the make-up items are limited editions and is only available for the holiday 2005 season only.

The collection is available exclusively in Isetan Suria KLCC, Malysia.