Tom Ford, the multi-millionaire fashion designer who left Gucci in 2004, is launching his own menswear label and chain of exclusive shops worldwide, it was announced yesterday. 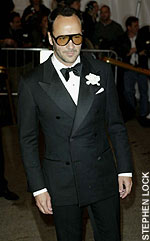 But Ford, who helped re-establish the Italian label as a major luxury brand, will break with fashion tradition by shunning the catwalk and the celebrity route.

“I want to change the system,” he said yesterday, from Los Angeles, speaking exclusively to The Daily Telegraph.

“This is not about celebrities or the catwalk. I’m done with that. This collection is a personal thing – it’s about me and the things I care about.

“It’s for people who really care about clothes and quality. It could be a guy who’s only 20, or it might be a man of 80. “Age is not important; it’s attitude.”

Initially, the only place where customers will be able to buy the clothes will be the first Tom Ford shop, on Madison Avenue, New York – opposite the Gucci store. It will open on November 1.

A store in London, and shops in Milan, Los Angeles and Tokyo, will open over the next three to four years.

Ford’s menswear line will be produced in partnership with the Italian group, Ermenegildo Zegna – the company that produced his menswear under both the Gucci and Yves Saint Laurent banners, when the American designer was creative director of both brands.

The first Tom Ford collection will encompass a full range of men’s clothes – including tailored suits and jackets, dress shirts, accessories, shoes and other leather goods.

Prices have not yet been fixed, but a Ford ready-to-wear suit is unlikely to leave much change out of £1,200. Ford said that everything in his collection would be available as ready-to-wear and bespoke.

Madison Ave. run for Ford Tom Ford, Clothing Designer, Will Open Store of His Own
Scroll to top