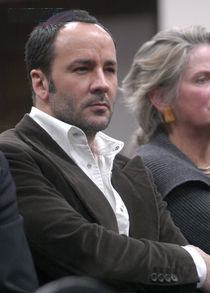 After getting a go-ahead from the Santa Fe City Council early Tuesday for his proposed estate atop Talaya Hill, fashion designer Tom Ford said he is eager to begin construction.

The guru of Gucci said he has been spending most of his Santa Fe nights in hotels, “which I don’t like.”

Councilors voted 8-0 to reject a neighborhood-association attempt to overturn the project’s approval by the city Historic Design Review Board.

“Obviously, I’m very happy I can start building my home in Santa Fe,” Ford said following the council vote, which came a few minutes before 1 a.m. Tuesday. A power outage earlier in the evening delayed a Monday council meeting, leading to the late hour for the vote.

Ford could not give a date for when he expects the home to completed but said he wants work to begin as soon as possible.

The design uses elements of the so-called old Santa Fe style, with long walls, rounded corners and details such as canales. The building’s exterior will be a medium-brown color, city records show. Heights vary between 11 and 20 feet.

It’s size had become a point of contention for some residents of surrounding neighborhoods.

“I guarantee there is not a home in our neighborhood with a 200-foot silhouette — two-thirds of a football field long,” said Peter Schoenfeld, president of the San Acacio Neighborhood Association. Schoenfeld had led the opposition to the project as it has proceeded through city committees.

Schoenfeld, who appealed the Historic Design Review Board’s February approval of the design, said the home’s massive scale was not in harmony with the surrounding neighborhoods. Ordinances that govern new construction in that part of east-side Santa Fe encourage designs to be harmonious with surrounding buildings, including color, material and size.

City staff argued that since the home site was on a hill above the neighborhood and there were no other residences within a 300-foot radius of the proposed home site, the Ford project was not a part of the neighborhood streetscape and was a unique project.

The council voted unanimously to reject the appeal filed by the neighborhood association but not without some criticism.

District 4 City Councilor Matthew Ortiz said he disagreed with the finding that the Ford site was not part of the local streetscape but felt arguments presented by the appellant did not warrant overturning the review board’s approval.

District 2 Councilor Karen Heldmeyer took issue with a statement by Ford’s representatives that they planned to plant enough trees around the home to screen it from view. She called the assertion “disingenuous.”