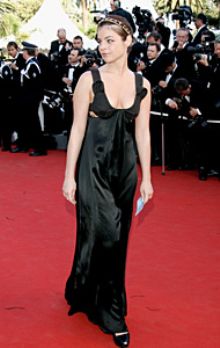 Clad in a gray three-piece suit, white shirt unbuttoned, and tan as ever, Tom Ford personally greeted high profile editors this morning, including Anna Wintour, Glenda Bailey, and Robbie Myers at special one-on-one appointments to introduce his new women’s fragrance, Black Orchid. Held in a townhouse on East 64th St. between Fifth and Madison, guests were met by an enormous, snowball-like, bouquet of purple orchids at least 5’ x 5’ in size. Accompanying the fragrant florals were super shiny, polished displays in black Lucite, meant to convey a “more vibrant Tom,” a publicist noted.

As The Daily reports exclusively, the big news to come out of the intimate introductions was the revelation that Julia Restoin-Roitfeld, daughter of French Vogue editor Carine Roitfeld, will star in the campaign for Black Orchid, which will launch in November officially as Tom Ford Black Orchid by Tom Ford Beauty. In the full-color campaign images, photographed by Mert Alas & Marcus Piggott, Roitfeld is shown with glossy long hair and red nails and lips, clutching the bottle in a boudoir-like atmosphere. “I’ve known her since she was a little girl, and it was amazing to see her grow up to become such a beautiful woman,” Ford told editors, adding that Roitfeld is “exactly what beauty is to me.” The master creative director noted that he didn’t want a model to star in the campaign; rather, he sought more of a personality.

As word has it, no black orchids existed until Ford approached a botanist with the idea of creating a one-of-a-kind flower for his fragrance. Headspace technology was utilized to extract the scent from the sole flower developed. The main note is the black orchid, naturally, but is accompanied by a patchouli base and hints of chocolate. The result is a scent that is spicy Oriental—not super heavy, but at the same time, a “personality smell” that is immediately recognizable.

As for that bottle that Roitfeld is clutching, it’s made by Lalique of black opaque glass. In fact, three versions of it will be available—the parfum, which features a gold band around the bottle; a hair perfume that’s gold-toned, and an eau de toilette that boasts a whimsical tiny gold bow and gold front plate.

Ford also used the opportunity to discuss his future endeavors. In an effort to build a complete range of beauty products, for fall 2007, he has a 125-piece cosmetics line under the Tom Ford Beauty banner in the works, and also plans to launch a male counterpart to Black Orchid. And in spring 2008, Ford plans on introducing a men’s skincare line.