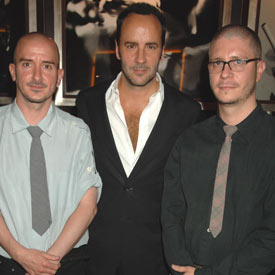 Whatever anyone says about Paris, Milan and New York, we believe London is the true spiritual home of edgy, experimental and innovative fashion and September’s Fashion Week looks set to be a feast of emerging design talent.

Fashion East – the showcase event which provides a platform for designers looking to establish themselves – is back with two new names. While partners Meadham and Kirchoff will show their second FE collection, knitwear designer and CSM MA graduate Louise Goldin will make her catwalk debut (last season Louise had an exhibition stand sponsored by New Generation) along with fellow CSM MA grad, Danielle Scutt.

The organisers of London Fashion Week are introducing, for the first time ever, an exhibition area dedicated to labels which adhere to an ethical code. Called Esthetica, the space within the main LFW exhibition is only open to brands which recycle, “produce in a safe and social environment,” and meet with standards for “organic production.” The new initiative is co-curated by the From Somewhere label and confirmed exhibitors include Edun – www.edun.ie – founded in 2005 by Bono, his missus Ali Hewson and New York designer Rogan Gregory.

In 2004 fuk was tipped Basso and Brooke to win the first ever Fashion Fringe competition, last year we didn’t make a prediction and Erdem won, but in 2006 our money is on the duo Six and Seven-Eighths to beat Gavin Douglas, Antonio Santana and Stephen Harper to scoop this year’s prize worth £100k. Six and Seven-Eighths is a partnership between fine artist David Wojtowycz and king of digital printing, Antonio Ciutto. “We are focusing on technique, pattern-cutting and research,” Antonio told us. “During my residency at the V&A earlier this year, I got the opportunity to really look at technique and that’s what we’ve explored.” All the Fringe Finalists are currently producing their collections at a London College of Fashion studio in East London and last week met up with the competition’s honorary Chair, Tom Ford.

There’s been quite a lot of industry banter about Christopher Kane, another Central Saint Martin’s grad who is set to have his LFW catwalk debut in September. Versace has been channelling his talents following his MA show, but we at fuk aren’t so enamoured – just one look at his horrific use of fur had us retching – New Generation or fashion fossil? Make your own minds up.