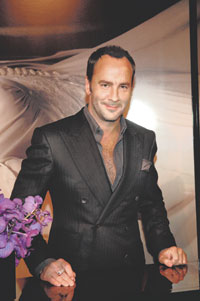 NEW YORK — Tom Ford arrived at Saks Fifth Avenue Thursday evening to launch Black Orchid, the first installment of a complete beauty brand to be introduced over the next year — and he took the highly unusual step of meeting with the store’s sales associates to give them pointers on how to sell the fragrance.

But his extra pains hardly seemed necessary, considering the reports that were circulating from industry sources — who indicated that Black Orchid is on track to set a Saks Fifth Avenue sales record for a fragrance launch. While the Estée Lauder Cos., which holds the Tom Ford Beauty license, and Saks executives declined comment, some sources estimated that Black Orchid could conceivably do $100,000 at retail for its launch week, which began Sunday. Also according to sources, Saks’ previous record holder was Viktor & Rolf’s Flowerbomb, which is said to have generated $65,000 its first week.

Steve Sadove, chairman and chief executive of Saks Fifth Avenue, would only say that the business is on “a record-breaking pace.” The scent, in addition to the Saks Fifth Avenue flagship here, is in the Neiman Marcus and Holt Renfrew chains, for a total of only 50 doors at present. It is expected to roll out to other specialty doors for Valentine’s Day.

Deborah Walters, senior vice president and general merchandise manager for cosmetics and fragrances at Saks Fifth Avenue, said, “When a designer talks to our associates, that’s the magic — and Tom is so warm.”

Andrea Robinson, president of Tom Ford Beauty and Prescriptives Worldwide, added, “Women and men both love it. I think that we’ll have a great Christmas.”

But John Demsey, a group president at the Estée Lauder Cos., has loftier goals. “Our aim is to make the Tom Ford brand the first truly full-fledged beauty brand of the 21st century.” Next up for Ford’s beauty line: Private Blend, a collection of 12 unisex scents that are expected this spring.

“It’s so wonderful to see this come to fruition,” said Ford, surveying the 200-plus people jamming around a main floor podium. “I’ve been working so hard for the last year and a half, and people haven’t seen all the things I’m working on. It’s the beginning of it, and it’s nice to start to see it.”

By Pete Born and Julie Naughton, photo by Steve Eichner

Tom Ford & A New Line of Unisex Fragrances Knickers? Not!
Scroll to top