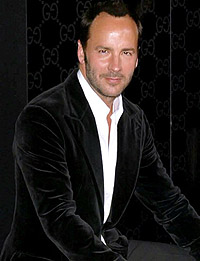 Tom Ford, the designer who helped to revitalize the Gucci brand, is tapping into a growing market for male grooming with the launch of a new menswear range and shop in New York next year.

Ermenegildo Zegna, Ford’s partner in the venture and owner of the world’s biggest luxury menswear group, believes that men are finally waking up to fashion.

“Men are becoming more feminine. They enjoy shopping, they take more time over the way they look, they travel and they shop around, they finally are taking better care of themselves,” he told Reuters.

“Men are not only there to buy cars and art, they’ve realized there is also fashion,” he added.

Zegna, whose great grandfather started his Italy-based group, said the time was ripe for Ford’s return to the fashion fray with menswear and accessories showing the biggest growth of any area in the luxury industry over the past few years.

“It is going to be a great collection. Many, many retailers are waiting in line to buy,” Zegna told Reuters in an interview at a luxury goods conference.

“The store will be opening in New York next spring and then the rest of the stores will follow.”

Ford roared to fashion stardom in his 14 years at Gucci with his sexy, tight-fitting designs coming to define luxury and celebrity glamour in the 1990s.

Since his abrupt split from Gucci and parent company PPR two years ago, he has only dabbled in fashion, putting his name to a range of sunglasses. The menswear, originally planned for release this year, will be his big relaunch.

Ford’s split from Gucci provided one of the biggest public spats to hit the fashion industry in recent years.

But his former employer Francois-Henri Pinault, chairman of the Gucci Group’s parent company PPR, speaking at the same conference, had no regrets about showing Ford the door.

“When we decided not to renew Tom Ford’s contract people were shocked,” he said. “But it worked out well for all in the end.”