Vera Wang, famous for her couture bridal gowns, is coming out with a line of $69 dresses and $99 handbags at the Kohl’s department-store chain. French fashion house Christian Dior is expanding its line of $3,500-and-up customizable handbags, allowing shoppers to choose their own skins, colors and hardware. And pop star Gwen Stefani, on the strength of her successful L.A.M.B. fashion collection, will launch a line of fragrances with Coty Inc. in the fall. 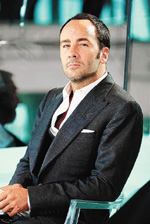 These are only a few of the changes in store for fashion this year as the industry enjoys a boom in luxury goods and wrestles with a glut of fashion designers.

What can shoppers make of it? With so many sometimes contradictory currents in fashion, we sought out Tom Ford, former creative director of Gucci Group who became a major force in international fashion in the 1990s, to discuss where the industry is going and how to create your own personal style.

Though best known for flourishes such as hip huggers and plunging necklines for women in the 1990s, he is also considered one of the industry’s most articulate predictors of the zeitgeist. The 45-year-old Texas-born designer, who left Gucci in 2004, will dive back into fashion apparel this spring when he introduces his first signature menswear line at a new Madison Avenue boutique.

As he surveys the global luxury-goods landscape today, Mr. Ford sees several big trends since his heyday at Gucci. In a shift from the era of mass luxury, which he himself helped usher in, consumers are demanding ever more uniqueness and customization in fashion. The designer also thinks that as high fashion becomes more democratic — with designer clothes available at Target and Wal-Mart — everyone is capable of pulling off a stylish individual look.

“You should never be intimidated by fashion,” he says. “It is meant to be fun.”

Mr. Ford’s approach to high fashion has always been a blend of innovation and accessibility — a characteristic that has caused some critics to deride him as more of a marketer than an artiste. But Mr. Ford shrugs. “I have always had very mass tastes — mass taste on a high level — and I’m proud of it,” he says. Mr. Ford’s mission as a designer was always “to be ahead of the curve but never too far ahead,” he says.

His own personal style is a variation of an open shirt with a blazer. “I never wear a tie,” he says. “Tight things around my neck give me a headache.”

Since he left Gucci, Mr. Ford has worked on several projects, introducing Tom Ford sunglasses that average $350, and a new fragrance under license with Estée Lauder Cos. — the exotic Tom Ford Black Orchid at a starting price of $90 a bottle.

Mr. Ford’s new menswear boutique will serve up a spread of pricey menswear — including custom tailored suits — as well as shirts, ties, shoes, luggage, jewelry and cosmetics with a “new level of service — a niche that doesn’t exist today,” he says. He plans to open Tom Ford boutiques in cities such as New York, London and Milan.

Here’s a look at some key themes Mr. Ford sees in fashion in the future, as well as a few tips on how people can define their own personal style today:

Mr. Ford’s tenure at Gucci occurred during a pivotal moment in high fashion, when Gucci, LVMH Moët Hennessy Louis Vuitton and Prada Group transformed the international fashion scene into multi-brand, billion-dollar empires, fueled by demand for $1,500 and up “it” handbags, the new status totems. From then on, upscale designer togs would be referred to as “luxury goods,” steeped in red-carpet hype and snob appeal.

Today, however, consumers no longer want to have the same thing at the same time. “Now everybody wants to have something different,” Mr. Ford says. “A woman doesn’t necessarily want the same bag her friend has. That is part of the appeal of vintage fashion — you don’t see yourself coming and going. It’s something that you found.”

Next spring, Mr. Ford will launch 12 new individual fragrances under his eponymous label marketed by Estée Lauder. The idea is “to give everyone something they will be able to latch on to,” he says. “People want the ability to be an individual. And that is why luxury keeps growing.”

Trends such as the expansion of the customized Dior handbag line suggest other companies also share his vision. For the first time, Coach introduced last fall a collection of handbags and accessories that can be monogrammed with up to three initials.

As more mass chains — from H&M, which has most recently teamed with Viktor & Rolf, to Target, which has deals with Isaac Mizrahi and others — produce low-priced designer clothes and accessories, high fashion is becoming more democratic than ever before.

Sitting in his London home, Mr. Ford says he himself is wearing a pair of Levis and a T-shirt. His T-shirts are always “from Gap or Banana Republic or some underwear label,” he notes. Such basic togs can hang in a women’s closet alongside, say, a $3,000 Chanel jacket because “the same chord is authenticity,” he says. “The idea is that good design should be affordable to all.”

“With Target, for example, you go in there and find something that is a great price and wonderful for its intrinsic value. This is democratization of fashion. I love this high-low concept,” he says, adding: “There is all this accessibility — everything is now online.”

During his years at Gucci, Mr. Ford used the GG logo as a launch pad for creating cachet, updating it and putting it on everything from shoes to handbags to dog beds.

Nowadays designers of every stripe high and low plaster logos on a broad array of merchandise, so that logos no longer carry the connoisseurship and cachet they once did. “I never thought logos were the way to sell products,” he says. Too often they are showy labels that don’t represent merchandise that is high quality. A logo is “only as valuable as the brand it represents,” Mr. Ford says. “People now are maybe more suspicious of that hollow product behind the logo.”

Still, he understands why many consumers are fixated on wearing logos: It demonstrates they belong to an elite group. “It’s just part of human nature,” he says.

Celebrity Marketing Is Here to Stay

“It has become so formulaic — the celebrities and the party pictures that run all over the world — and I am just tired of it,” says Mr. Ford, who spends part of the year at his home in Los Angeles. “I have a lot of friends who are actors and actresses, and in some cases [all this publicity centering on fashion] hurts their careers. It demystifies them — you get so tired of seeing someone’s face on an advertising billboard.”

In 2006, several luxury goods makers, including Versace, veered away from stars to showcase models in their ad campaigns. Yet celebrities continue to dominate most fashion advertising and product endorsements. And a growing number of stars including Gwen Stefani and Beyonce have been pushing their own fashion lines.

“In a way, it is understandable [that celebrity marketing thrives]. They are a constant in our lives. In a way, they have become our family,” Mr. Ford says. “You can move from one city to another, but you can pick up a magazine and know what Lindsay Lohan is doing. You know everything about them.”

Sensual Is the New Sexy

At Gucci, Mr. Ford was the designer most responsible for ushering in the ultra-sexy style of the 1990s. There have always been sexy fashions, but that decade’s look, from low-cut pants to gowns with plunging necklines, sizzled with sex appeal.

“Right now, sexiness in fashion has given way to sensuality” — a more subtle look, he notes. But “everything is cyclical,” says Mr. Ford. Sexiness in fashion “is never going to go away. Because we are human beings and that is one of our fundamental drives: our attraction to other people.”

The reality is that while beauty standards come and go, people “want to look beautiful and want to look attractive in clothing.”