Launching a dozen fragrances at once isn’t exactly routine behavior. But Tom Ford has built his career on going his own way.

Ford — who is readying the launch of his new Private Blend fragrance collection, a Manhattan store to house it and a passel of additional projects to which he’ll only allude — enjoys being busy. 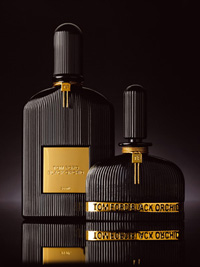 “You have a lot of energy when you’re doing what you love,” said Ford last week during a phone interview from his home in London. “I’m really excited — the Madison Avenue store opens in about eight weeks, and Private Blend will launch with it. People who haven’t seen me much are probably wondering what I’ve been doing. Now, they’ll know.”

The initial Private Blend collection consists of 12 unisex fragrances, each with one primary ingredient folded into what Ford calls a “sequence” of secondary ingredients, including saffron and plum. “I wanted to call it Bespoke, but Lauder [the Estée Lauder Cos., which holds his beauty license] said that no one outside of London knows what bespoke means,” said Ford with a laugh.

In a sense, “bespoke” neatly describes Ford’s aspirations for all of his future pursuits. “I don’t mean to sound arrogant, but I wanted to form a true luxury company — even in fragrance and eyewear, which are generally more broadly distributed,” said Ford. “We’re trying to do things in the most beautiful way that they can possibly be done with the highest level of quality. Yes, the price points may be higher than our competition, but our distribution is very targeted. We’re trying to be as good as we can possibly be. Projects like Private Blend give us the ability to do the best of the best.”

The Private Blend scents are Amber Absolute, Noir de Noir, Velvet Gardenia, Black Violet, Tobacco Vanille, Oud Wood, Purple Patchouli, Bois Rouge, Moss Breches, Tuscan Leather, Neroli Portofino and Japan Noir. “When I was creating Black Orchid [his women’s scent, launched in November], I kept smelling other things I liked — many of which were too expensive to use in a broadly distributed fragrance, and others that we can’t use for a broader fragrance because they won’t appeal to everyone. I kept putting more and more things aside. Finally, it just seemed to make sense to develop them for my store.”

While he insists that his dozen scents are unisex, Ford conceded that six of the scents were more likely to be strongest for men, with an equal number expected to appeal chiefly to women. “I wear Black Orchid a lot, but I’m not your average guy,” said Ford. “But these are fragrances for fragrance connoisseurs. I don’t think we’re going to see too many guys worrying about wearing a women’s scent. We have something for everyone with this collection.”

Purple Patchouli is “sort of Sixties, with orchid, black leather and amber,” said Ford. “Bois Rouge has red cedarwood; Noir de Noir is a chypre oriental with patchouli and tree moss; Moss Breches is this really rare moss, and Tobacco Vanille smells like pipe tobacco. And these are fully developed fragrances, not one-note products.”

Velvet Gardenia is also close to Ford’s heart. “I always wear a gardenia on my lapel at black-tie events,” he said. And lately, Ford has been wearing Tobacco Vanille, although he stops short of choosing a favorite: “They’re all my children,” he said.

While the Private Blend collection started as a project for Ford’s new store, it has caught the attention of other high-end retailers, including Bergdorf Goodman, Neiman Marcus and Saks Fifth Avenue. But distribution will be strictly limited, noted Andrea Robinson, president of Tom Ford Beauty and Prescriptives Worldwide. “It will be one door here, one door there —and only five U.S. doors,” she said. “We will also have a hyperselective number of doors abroad — we will be in the U.K., France, Germany and Italy. Scarcity is what this is all about. It is not a collection for everyone.” In Ford’s own store, Private Blend will be displayed in a store-in-store apothecary. Beautiful iconic shots by Guido Mocafico of the fragrances with ingredients in the background will be displayed in all stores carrying Private Blend. “Since the architecture of the bottle doesn’t change, we need to convey how they’re different,” said Ford.

While none of the executives would discuss sales figures, industry sources estimated that the Private Blend lineup would do about $8 million at retail in its first year on counter.

Each of the Private Blend scents will be available in a 1.7-oz. eau de parfum spray flacon for $165 and an 8.3-oz. eau de parfum decanter for $450. Packaging is a rich dark brown with gold accents. “I always think about what something’s going to look like on your dresser,” said Ford. “This is a very deluxe, apothecary bottle in dark brown, one of my very favorite colors.” There’s another reason for the shade: “When you go to a lab at a fragrance house, all of the oils are in big dark bottles to protect them from light,” he said, recalling his jaunts to International Flavors and Fragrances, Givaudan, Firmenich and Quest to concoct the fragrances.

In fact, Ford had so much fun mixing and matching in the labs, he’s not planning to stop at a mere 12 scents for Private Blend. “With this collection’s framework, we have the ability to continue to develop new scents without retooling and doing new bottles,” said Ford. “We can develop custom fragrances for customers, and we can develop exclusive fragrances for certain stores — say, develop a special Neiman Marcus Christmas fragrance. The scents that are successful will stay; others, we’ll edit out. We will be constantly experimenting, as a laboratory does. If we find one that’s a runaway hit, we have the capability to develop it into a more broadly distributed scent.”

“Tom is using Private Blend, literally, as his scent laboratory,” added Robinson. “He views it as his personal statement, and a place from which new fragrances can emerge. Since Tom has such a fantastic nose, he gets to experiment and bring forth ideas for a sophisticated consumer. This one takes perfumery to a whole new level. We need something that shakes up the way that fragrance is approached — and Tom is a guy who likes to do that. He does it with a great sense of history. These definitely are fragrances that will stand out in a crowd.”

A Ford-created look book will be distributed to top customers, said Robinson, adding that in-store events and word of mouth will be the key promotional vehicles.

In addition to Private Blend, Ford has readied a men’s fragrance for launch this fall, and he will do a Private Blend Home Collection in fall 2008. A 125-piece color cosmetics line and a women’s skin care collection are also in the works. Another women’s fragrance is expected in spring 2008, and a men’s grooming line is in development. “Tom has just started to say what he has to say,” said Robinson. “This company that we are building is unique — even two years later, we are awestruck by his ideas.” For his part, Ford can’t wait to see all of his projects together: “When you start to see it all together, a strong brand philosophy emerges,” he said. “It’s so exciting, when you’ve been working so long, to see it all come together.”

Despite being the king of all things sexy while designing women’s wear for Gucci and YSL, Ford isn’t planning a return to women’s clothing — at least not yet. “I might keep a few things in the new store,” he said. “But I’m not doing a women’s line right now.”

If he needs another project, Ford might like to try star-searching: at the launch party in November for his women’s fragrance, Black Orchid, the featured singer was Jennifer Hudson, who later became a Golden Globe and SAG Award winner and an Academy Award nominee for her work in “Dreamgirls.”

“I was blown away by her,” said Ford. “She’s a great girl and so sweet. How amazing to go from ‘American Idol’ to Academy Award nominee.”

Which begs the question — could Hudson star in a Ford Hollywood production?

“Now, I’m not going to talk about that until I get a film made,” he chided playfully. He’s previously told WWD that he’s working on developing at least four projects — and along the way, he has discovered a major Hollywood truism.

“Everyone says it takes forever [to make a movie],” Ford said ruefully. “No kidding.”