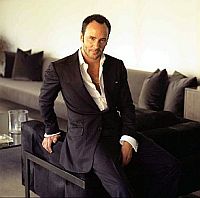 Designer Tom Ford has returned to the fashion spotlight with a menswear collection. His successful revitalization of Gucci in the 1990s sparked an industry-wide rampage to resuscitate other dowager brands and pushed clothing toward a hypersexual aesthetic.

Now he wants to make the man in the gray flannel suit the star of the menswear industry. He’s fetishizing functional buttonholes on jacket sleeves. He’s got a tie silhouette named after Prince Michael of Kent for a fella who wants a knot as big as a child’s fist. He’s got a top hat in his display case.

The Tom Ford brand is a partnership with financial wizard Domenico de Sole. Over the course of a decade, the two masterminded the transformation of Gucci Group from a single brand teetering on the brink of disaster into a conglomerate that now includes Stella McCartney, Balenciaga and Yves Saint Laurent. The pair’s departure from Gucci in 2004 signified the end of an era of rapid expansion by fashion companies.

During his tenure at Gucci, Ford once noted that the essence of his job was to know what consumers wanted before they could even imagine it. He led the way in reviving logos, low-slung boot-cut trousers, embellished sportswear and a slithering disco sensuality.

A larger-than-life personality who used his charm to woo media and customers alike, Ford was one of the few designers with star power to rival that of the Hollywood celebrities he dressed.

On Monday, fashion’s oracle unveiled his collection of men’s ready-to-wear, his made-to-measure atelier and the Madison Avenue boutique in which it is all housed.

“I feel a tremendous amount of pressure, probably of my own making,” Ford says. “I’m sure there’ll be some people wanting to know why there are no sexy hip-huggers.”

The two-story boutique, designed like a townhouse, is decorated to resemble Ford’s own home in London, with beaver-pelt rugs and ebony woodwork. It will be staffed by the usual sales representatives, as well as maids and butlers who will fetch drinks, lunch or whatever else a client in the midst of a private appointment might need.

The idea is to create “a residential environment that reflects the lifestyle of the clients,” Ford says, a description that should give an indication of the sort of disposable income required to indulge in his latest vision. Ready-to-wear suits begin at about $3,200 and made-to-measure ones at $5,000. The least expensive item of clothing in the boutique is a pair of socks — hand-woven — for $75.

The suits, made by Italy’s Ermenegildo Zegna in a licensing agreement, are distinguished by their restrained — even conservative — cut and attention to detail: hand-knotted lapel buttons, tiny buttons that secure the trouser cuffs so that they can be folded down and any dust whisked away by a valet, and BlackBerry pockets constructed so that a man does not have to sacrifice the line of his jacket in the name of technology.

Ford has stocked his display cases with $3,900 silk dressing gowns that are updates of 18th- and 19th-century prints. There are sapphire and diamond cuff links, handmade shoes and riding boots.

This is not fashion — at least not in the way Ford’s former Gucci customers are accustomed to it. The changes from one season to the next will be subtle, perhaps barely discernible. “A lot of the clothes will be seasonless,” he says. “The shoulder shapes should last three years.”