Putting the designer’s new store to the test. 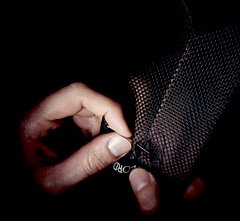 During a week of press previews, Tom Ford was his usual self—charming, quotable, perfectly stubbled—as he offered a series of intimate tours of his new Madison Avenue menswear store, the first under his own name. As the designer persuasively stated, the shop’s appeal will rest on exceptional service and immaculate clothes. Nearly everything (from underwear to fragrances) can be custom-designed, and the staff includes 12 salespeople, two tailors, and four seamstresses (there is even an on-site atelier, which Ford dramatically revealed by pulling back a curtain in one of the dressing rooms).

Sounds great, especially when delivered in Ford’s poised Anglo-Texan twang. But we figured the proof is in the pudding, so on the store’s opening day we sent an undercover agent—a young investment banker of our acquaintance with a serious Savile Row habit—to see for himself. First impressions? “The shop was definitely sexy and seductive,” our banker reports. “But the overall effect was that sort of aggressive, in-your-face cool feeling that made Ford famous, which left me a little cold.” In fact, the store is intended to have a residential feel, with many elements (beaver-skin rugs, oversized lamps, the sly Lucio Fontana artwork, seen above behind the model) coming from Ford’s own collections. The design is 1930s-inspired, with a wet bar and even butlers and maids who will fetch you lunch during your appointment. “If they were trying to create a clubby atmosphere, I didn’t quite feel it,” says our source, but quickly adds: “That may be due to it being a little chaotic because it’s their first day.” And more importantly, the clothes had him rethinking his London shopping sprees. “The quality was impressive. Some beautiful fabrics and very nice cuts,” he says. “Bottom line, I made an appointment to go back next week to get fitted for a suit, so I guess I got drawn in.” That Tom, he’ll get you in the end.