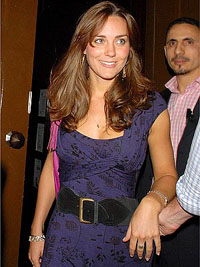 As rumors go this is a hot one. Kate Middleton, formerly of the Prince William and Kate Middleton show, might go to work for Tom Ford as some sort of in-house consultant or public-relations person. Since she likes fashion (she works as an accessories buyer for Jigsaw, the British clothing chain), the thinking is that some clever fashion house will score a big public-relations coup by hiring her. (Has Helen Windsor already whispered the idea to her friend Giorgio Armani? Well, ready the smelling salts for Valentino if Giorgio gets her.) And if, maybe as a favor or a kindness owed his ex, young William supports young Kate’s new job by wearing one of her designer’s suits or, even better, turning up at a fashion show, she will be worth her weight in publicity gold.

This is just one of the topics zipping around the restaurant of the Carlyle Hotel, setting for a dinner for about 120 people after the grand opening of Tom Ford’s handsome boutique at 845 Madison Avenue, the flagship for his new menswear collection. In his new suits Tom looks, everyone notices this and The Times reports it, about four inches taller than he ever did when he worked for Gucci.