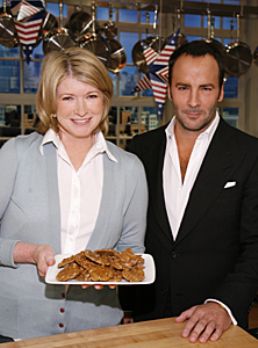 (NEW YORK) “I think I identify with her in a certain way because she’s a perfectionist,” said Tom Ford of his hostess on The Martha Stewart Show Tuesday, where the queen of domesticity and the man who reinvented sex chatted, joked, and made pecan pralines from an old recipe of his grandmother’s.

“It’s funny because as we were about to go on, I told her I liked her shoes and she said they were Christian Louboutins,” he said backstage afterward. “She said she painted the soles from red to black and I said thank God! I’m so tired of getting teased about painting my tractors black! And she said, ‘Well, I paint all mine grey.’”

On stage, Ford, clad in a black suit with trademark unbuttoned shirt and white pocket square, traded quips with Stewart, who donned her favorite Hermès cardigan and button-down, Ralph Lauren jeans, and said Louboutins. The two played up the banter for the audience and Stewart showed a photo of Brad Pitt wearing Ford’s tuxedo at the Cannes Film Festival Monday night. “Maybe you could get David Letterman to stop wearing double breasted and wear this,” she suggested as Ford later presented four looks from his men’s collection in an informal fashion show. “I miss my Gucci suits that Tom made.”

Ford was part of an hour-long show that also included a Fourth of July special, a recognition of Fleet Week, and tips for storm safety. But it was the dashing designer that had the audience of nearly all women captivated. “I want to see the underwear!” one woman from Long Island squealed. “I like the outfit,” whispered a 20-something during the introduction. “The open shirt is nice.”

“As a kid I was always partial to things I could decorate,” said Ford in between mixing butter and cream. “I can cook for myself, but like most men, I’m really great on the grill. I have a grill in London and Los Angeles. I’m trying to avoid Santa Fe right now, though.” Ford also alluded to the possibility that he may create and distribute wine. “I have a vineyard, and we will be making wine,” he said. “I’ve been doing it for about three years now.”

Ford’s onstage charisma seemed to rub off not just on the female audience, but the cameramen and stage handlers, who were observed pressing wrinkles out of their shirts and making quick outfit adjustments. “I once deejayed a fashion show for Dolce & Gabbana,” a camera supervisor boasted during a commercial break.

Guests, perhaps as a figurative example of the melding of creative cultures, left the taping with a glossy black Tom Ford gift bag that included a bottle of Black Orchid alongside creations from Stewart’s signature line and an arts-and-crafts hole puncher.

“What I’m talking about—men dressing up and cleaning up—isn’t anything you have to buy clothes for,” Ford explained. “You just make the effort and have your boyfriend or husband put on a jacket when you go out to dinner. That message is something I’d love to see become much broader, so why not present it to this audience?”

Did Ford think there was a viable market for his men’s wear designs in, say, the Midwest?

“Well, there’s fragrance and eyewear for St. Louis and Kansas City, isn’t there?”

Line 2 baking sheets with parchment paper; set aside. In a 3-quart saucepan, mix together sugar and baking soda. Add cream and place over medium-high heat. Cook, whisking occasionally, until golden brown and mixture reaches 235 degrees on a candy thermometer, 25 to 30 minutes. Add butter and pecans and mix together until butter has melted and mixture is well combined, about 1 minute. Using a tablespoon, drop mixture onto prepared baking sheets about 2 inches apart; let cool completely. Store in an airtight container up to 3 days.