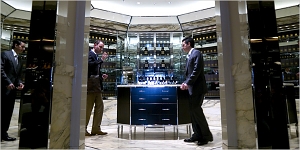 I ( Lauren Goldstein Crowe ) went to the Tom Ford store in New York on Saturday and sighed with relief. I wrote earlier that I thought the backlash was a little too predictable and far too early to be a sign of the store’s fate. And on this sweltering Saturday afternoon, it seemed I was right. The place was humming. No fewer than six couples were there (OK, doesn’t sound like much, but it was more than were in most of the other stores I walked by on my way up Madison Ave, and it’s only half the size), and two of the men were buying — right before my very eyes. One was being chalked in his suit, while the other was working through a long list of shirt options with a salesman. I found the store neither elitist nor rude. The security guard was funny (When I ran my hand over the bronze alligator-skin desk and said, “cool” he said, “Yes, I am”) and the salesmen were happy to let me — a woman alone and rather sweaty and crumpled looking at the time — smell every perfume in the range and give the place a once-over although it was pretty obvious I wouldn’t be buying anything.

The customers were very young, late 20s to late 30s, and pretty clearly New Yorkers. They walked in wearing the Saturday afternoon uniform of flip flops and shorts and clutching iced coffees. (And no one made them put them down before they were allowed past the entrance, which happens at Jeffrey’s.)

On the subway afterwards I saw one of the couples that had been in the shop. Matt, a shoe designer, and his mother had been shopping for his wedding suit. Matt said he was pleasantly surprised by the atmosphere in the store, as he had also read Horacio Silva’s review in the New York Times. He also said the suit there fit better than any he tried at Prada or Yves Saint Laurent. His mom and I both loved the room full of candy-colored shirts (very Great Gatsby). Her only complaint was that the dressing rooms were to dark and too in the line of traffic. (I never saw them.)

I do have to agree with Iman’s comment in the Business of Fashion — the entombed ready-to-wear has to be set free. To have the clothes in glass wardrobes inhibits the customer’s first instinct, to feel the clothes (old hands in the men’s suit business call it “milking the sleeves”), and the second impulse, to hold them up for closer examination.

This then is my list of predictions/recommendations for the things Tom will change for store number 2. (Rumored to be in London, but not on Bond, Sloane or Mount Streets. Any other guesses?)

1. Get rid of the separate hours for custom and ready-to-wear shoppers. Who knows whom you’re missing? (I wasn’t allowed up to the custom room as it was velvet-roped off).

2. Free the ready-to-wear. Have those doors removed at once! (There was no one shopping in that room when I was there and I have to wonder if that wasn’t part of the reason why).

3. From what Matt’s mom said, the dressing rooms need to be revisited. There’s nothing worse than lack of adequate lighting. Under Tom’s reign at Gucci they instituted adjustable lighting so you could check yourself out in most every situation.

Tom being Tom, we’ll be seeing some changes. But in the meantime, it’s far to early to write this concept off.