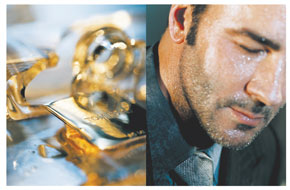 The Tom Ford brand continues to be on a fast track expansion with no less than four upcoming releases: Tom Ford for Men, Tom Ford for Men Extreme, Black Orchid Voile de Fleur, and an as of yet unnamed women’s perfume to be launched in the spring of 2008. As previously reported, Tom Ford is interested in establishing brand recognition in the sphere of fragrances as quickly as humanly possible and is doing everything in order to be perceived as a leading perfume house with a substantial catalogue of creations to boot, which means 16 in just one year…..

On September 23rd of 2007, Tom Ford for Men will debut at Saks. A key ingredient, Cypriol, has been added to the mix so as to render it sexy and as a substitute for natural musk. “The juice, created by Ford in cooperation with International Flavors & Fragrances, opens with Mediterranean Hesperdic [sic] notes combined with lemon leaf oil, Italian bergamot, mandarin zest, basil grand vest, violet leaves and ginger. The heart is of Tunisian orange flower absolute, black pepper, tobacco leaf absolute and Moroccan grapefruit flower. The drydown is of deep amber accord, cedarwood heart, Virginia patchouli, vetiver mist, oakmoss, leatherwood and the aforementioned cypriol. The ridged clear glass bottle is reminiscent of Ford’s Black Orchid women’s scent and features an engraved name plaque embellished with 18-karat gold plating. Outer packaging is black with gold accents and a gold label. The scent will be available in two sizes, $55 for 50 ml. and $78 for 100 ml.”

Next in mid-November comes Tom Ford for Men Extreme which will be available in the selective distribution circuit of the Tom Ford boutiques and is presented as the niche version of Tom Ford for Men. This means, as we had noted previously and as confirmed by Tom Ford himself now that it will be a more powerful version of the more mass-marketed one. Here’s our own quote regarding the feel of his niche offerings: “The fragrances make big statements; the collection could have been called “Intense” or “Extreme Ford” and it is in this respect that it is the most remarkable since otherwise many of the fragrances can be traced back to other existing fragrances.”

In the fall, Black Orchid Voile de Fleur will be introduced. It was originally the eau de toilette version of Black Orchid. Expect an injection of white florals into the black orchid accord.

Finally a mystery women’s fragrance that is already all done will be presented in the spring of 2008.