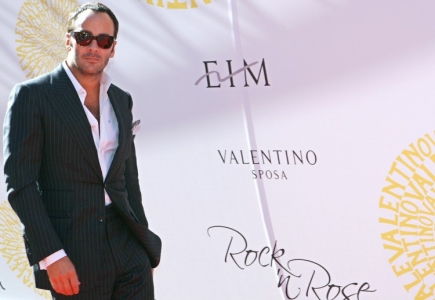 Let’s catch up with Tom Ford.

The iconic, Texas born designer—as famous for his revival of Gucci and Yves St. Laurent as he is for his one man campaign to bring chest hair back into the gay aesthetic—is the subject of several new essays that crossed the transom. The first is by Nick Burns over at Out.com’s Stylelist, who profiled Ford as part of his new series of fashion’s sexiest designers. Ford has been quite busy since leaving Gucci and YSL …

Three years later, after some dabbling in magazine publishing and ideas of film making, the hairy-chested cowboy returned to fashion little by little—beginning with reformulation and marketing work on a staid Estee Lauder perfume

, then a collection of eyewear. This year, Ford exploded onto the fashion scene again with an eponymous high-end, made-to-measure and ready to wear menswear collection, sunglasses, a signature line of fragrances—immortalized with Ford’s description that they “smell like the sweat on a man’s balls”—and opened a flagship store in New York City.

For some years, custom-brewed fragrances have become de rigeur for the modern gay man. That trend has been adopted by 20-something urban men whom fashion marketers call “Generation Axe” because they have “been bombarded by the overtly sexual ads for Axe body sprays [and] do not think that wearing fragrance is somehow unmanly… Free from qualms about wearing fragrance, and free from qualms about whether a fragrance smells masculine, those young men are subtly altering the men’s fragrance head space, a move that can be seen as readily at Wal-Mart as at Barneys New York.”

The reporters note “Tom Ford’s complex (and pricey) fragrances are among the hottest sellers” in this field, especially at high-end department stores such as Bergdorf Goodman.

Obviously, Ford and his fragrance have received major traction from the rather un-artful description—”like the sweat on a man’s balls.” Thankfully, the Times report does not include any scratch-n-sniff cards.

Tom Ford and 100 Sexiest Men Tom Ford: The man behind the brand
Scroll to top