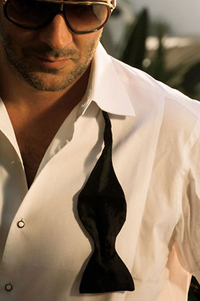 A strong brand may be the most valuable thing in retail these days. Maintaining the credibility of that name in a market saturated with brands is what separates the flash in the pan from the successful.

Not every bold face has an aesthetic that can sell. Designer Tom Ford is not just a brand, his design sensibility permeates everything from his store, to his ad images to the presentation of the brand concept itself. In a coup for Neiman Marcus and Bergdorf we now know that they will be the department stores of choice for designer Tom Ford’s new line. In a rare move, Ford will also make the leap into emerging markets at a time when he only has one store.

Why would retail partners like UAE Trading, Harrods, Lane Crawford Joyce, etc. back the international expansion of a month’s old line that is only sold in a single market here in the U.S.?. The answer: Tom Ford is a businessman and a fashion mind well aware of the many dimensions behind the art of marketing and maintaining a brand. He reportedly trademarked his own name back in the 1990s at a time before it became synonymous with Gucci’s reborn success. Ford finally announced which retail partners will be taking his menswear line to the global retail space.

Ford has taken his time finding the right retail partner to sell his marquee name. After setting up shop on Manhattan’s Madison Avenue this April and signing a licensing agreement with Ermengildo Zegna for production, the man who remade Gucci has been building up the business behind his own identity for this moment.

He’ll also have store within a store shops in Bergdorf and Neiman Marcus along with his own name-brand vertical shops in London, Milan, Hong Kong, LA and Tokyo.

Here in New York, hedge fund king Eddie Lampert shops at Tom Ford along with a slew of high-profile names from the financial world who favor bespoke suits over Brooks Brothers. With Chairman Domenico de Sole behind him (formerly of Gucci) and a stable of welldressed clients with deep pockets, there is no question that Ford is flush with financial options when it comes to finding the right partners. These days there are plenty of designers without such brand equity behind them–who are looking for partners with deep pockets to take on the increasingly expensive task of opening stores and getting product on the shelves of a fewer and fewer number of department stores.

Tom Ford: The man behind the brand Tom Ford spotted in Hollywood
Scroll to top