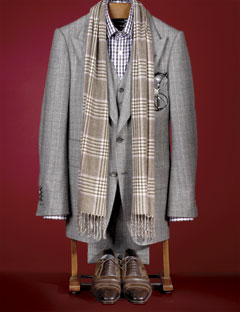 Tom Ford’s a decade older since he left Gucci, and aging suits him.

You’ve got to hand it to the guy. After rising to power in the early ’90s, the little-known Southern charmer resuscitated an ailing institution and ruled over the decade with an iron fist and a velvet glove. Now, a few years since stepping aside, he’s back in the game. We’re referring, of course, to would-be First Mate Bill Clinton, but swap out the Democratic party for an Italian fashion house and you’ve got Tom Ford. With his new line of men’s wear, the former creative director of Gucci has shifted away from the sexually charged aesthetic of his earlier years to a more classic approach to tailoring. His suits, both ready-to-wear and made-to-measure, are designed with lean proportions that are equal parts Savile Row and Old Hollywood, and the rest of his collection, from shoes and shirts to ties and outerwear, is similarly traditional. It’s an ambitious beginning, but as Ford (or Clinton) could tell you, you won’t get anywhere by thinking small. Three-piece cashmere suit ($3,950), cotton shirt ($890), cashmere scarf, leather-and-suede shoes ($1,390), and glasses ($425) by Tom Ford.