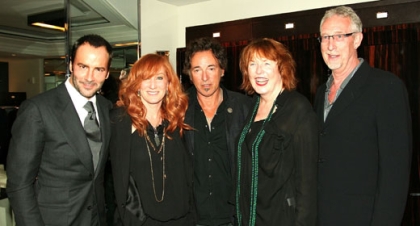 Last night, there was a party for artist and photographer Marilyn Minter’s eponymous new coffee-table book at the vault-like Tom Ford boutique on the corner of 70th and Madison Avenue (forgot that Tom Ford, former designer for Gucci, has a boutique? We forgive you).

“It’s kind of a welcome back to school party, so you get to reconnect with everyone you haven’t seen for the summer, and that’s always fun!” gushed nightclub owner Amy Sacco, wearing a rust-colored silk dress with cream safari stripes. “I’m trying to keep it as high-end as Tom and that’s not very easy. I mean, he keeps a high standard for us all.”

What is Ms. Sacco looking forward to this week from her friend Mr. Ford?

“A kiss later at dinner!”

Mr. Ford was circulating in one of his $5,000-plus bespoke suits, trailed by the world’s best-dressed bodyguard. “This is about Marilyn Minter tonight!” he said, when asked about his new collection. “It’s great! She shot two of our ad campaigns. She’s a wonderful artist and she’s worked so hard and she’s finally having a lot of success and she’s a terrific woman and a terrific artist.”

“Oh, my God! Well, look at it! It’s sooo, like, she’s not afraid as an artist…The pictures are really strong and graphic.”

Later, Mr. Ford entertained a few lucky guests in an private, wood-paneled, tightly guared fitting room that looked something like a Gstaad hotel suite. As the party drew to a close, a gaggle of paparazzi on the street chased after Mr. Ford and three of his dinner companions, which included Bruce Springsteen (?!), as they ducked into a waiting black Escalade. Inside the shiny vehicle, sitting behind Mr. Ford’s second-row captain’s chair, Ms. Sacco could be seen laughing excitedly.