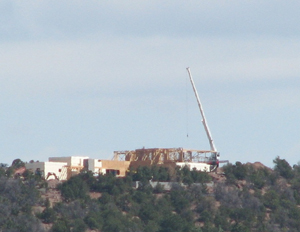 SANTA FE — Fashion designer Tom Ford has bought mineral rights beneath his Galisteo ranch southeast of Santa Fe in an attempt to protect his land from possible oil exploration in the region.

Ford paid the state Land Office about $84,000 earlier this year to purchase the mineral rights to more than 1,400 acres, according to Land Office records.

“We are protecting our land by holding these rights,” said Ford’s attorney, Janet McKay. She declined further comment.

The purchase came in response to Tecton Energy’s controversial proposal to drill eight exploratory wells on 65,000 acres, or 101 square miles, in the Galisteo Basin where it has acquired mineral rights.

Ford’s representatives initially tried to persuade the Land Office not to sell oil and gas leases on property near his ranch, although state trust lands are only a small slice of Tecton’s holdings, said John Bemis of the Land Office.

The office was obligated to proceed with the bid sale because the agency is charged with raising revenue from the use of state trust lands to benefit public education, said Bemis, an assistant commissioner for oil, gas and minerals.

“It was tough for us to say, ‘We want you to enjoy your lifestyle out here, Mr. Ford,'” Bemis said.

Ford’s spread includes a working cattle ranch and an Old West movie set that has been used for several films, including the recent “3:10 to Yuma.”

Ford grew up in Santa Fe before moving on to become one of the world’s most influential fashion designers, with Yves Saint-Laurent, Gucci and then his own Tom Ford line.