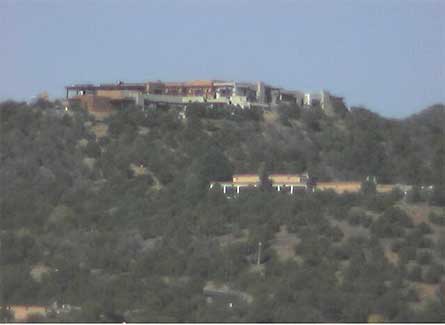 SANTA FE— Fashion designer Tom Ford earlier this year acquired some of the mineral rights beneath his Galisteo ranch in an attempt to protect his land from possible oil exploration in the region.

In March, Ford paid about $84,000 through a brokerage firm to buy the lease to mineral rights to the more than 1,400 acres from the State Land Office, thereby preventing someone from one day drilling on his ranch south of Santa Fe, according to Land Office records and officials.

The purchase came in response to Tecton Energy’s controversial proposal to drill eight exploratory wells— and perhaps several more— on 65,000 acres in the Galisteo Basin southeast of Santa Fe where it has acquired the mineral rights.

Ford’s representatives had originally tried to persuade the Land Office not to sell oil and gas leases on property near his ranch, an agency official said Friday, though state trust lands are only a small slice of Tecton’s holdings.

But the Land Office was obligated to proceed with the bid sale because the agency is charged with raising revenue to benefit public education, John Bemis of the Land Office said Friday.

“It was tough for us to say, ‘We want you to enjoy your lifestyle out here, Mr. Ford’,” said John Bemis, an assistant commissioner for oil, gas and minerals.

Like Ford, scores of residents living in and around the Galisteo Basin face the hard reality that owning their land doesn’t mean they also own what lies beneath.

There’s little a surface owner can do to stop a mineral owner who wants to drill. “Both people have legitimate property rights,” Bemis said.

Split estates are a remnant of 19th-century homesteader laws in which the government gave settlers surface rights while keeping mineral rights for itself.

Most landowners probably had no idea when they bought their properties that the region was potentially rich in oil and gas, Bemis said.

There was a time when oil wells dotted the area and produced a relative trickle of petroleum. But that was two decades ago.

Residents of Madrid, Cerrillos and Galisteo strongly oppose the plan, which awaits consideration by the Santa Fe County Commission and state regulators. Residents will have the opportunity to weigh in on Thursday during the second of two meetings held by Tecton to gather public input.

Tecton officials have said they are committed to working with the community to ensure that energy development is as environmentally sensitive and unobtrusive as possible.

Even if landowners like Ford own both the mineral and the surface rights, they may still not be protected from energy development, Bemis said.

The reason is that a mineral owner who has no desire to get into the oil business can still be “force pooled”— a process by which one owner’s minerals are pooled with those of a nearby owner who wants to drill.