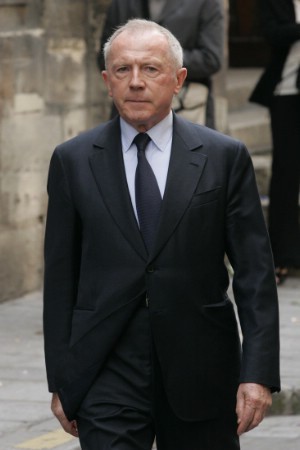 Several years after Tom Ford’s departure from Gucci in 2004, the tension between Gucci’s former Creative Director and the brand’s owner, Francois Pinault (PPR), is still very much alive. The catalyst for this latest round of salvos is a statement made by Pinault during an interview in the December issue of Vanity Fair magazine during which Pinault states:

“I have no regrets,” PPR’s ceo, Francois Pinault, declares in the December edition of Vanity Fair. “But it would have been better if I’d have hired [Ford] ten years earlier.” With reference to Ford’s ego, Serge Weinberg, Pinault’s business partner, adds: “He’d lost touch with the ground. He had no experience of management on this scale.” Ford’s response? “It is amusing that Serge says he had ‘no experience of management of this scale’ as it was precisely our management of the company for 14 years that built Gucci Group into the company that it is today,” he retorts. “As for my ego, I am afraid Serge is confusing that with my job description, which was to guard and maintain the integrity of the brand and to protect it from exploitation for short-term benefits. Serge was a fish out of water at Gucci Group, as he had absolutely no experience in the fashion or luxury-goods sector. He is a nice guy, but had no understanding whatsoever of our business. He was a bit surprised, I think, when I challenged his knowledge of things, which I often did.” (Source)

The Luxe Chronicles believes that Pinault’s and Weinberg’s comments are somewhat unfair. Weinberg is a longtime ally of Pinault at PPR and most likely his mouthpiece for these latest jabs at Ford. While Ford may have a healthy dose of self-esteem (not exactly rare in the fashion industry), before his recruitment by former Bergdorf Goodman CEO Dawn Mello, Gucci was in a precarious position. Plagued by years of mismanagement, infighting and poorly managed licensing agreements, the prestige of the brand had been severly diluted and it’s image had gone the way of Pierre Cardin’s. In addition to his strong, coherent designs for Gucci’s groundbreaking Fall 1995 collection, Ford’s recruitment of Paris Vogue’s Carine Roitfeld to style the collection and Mario Testino to shoot the ad campaign, created the perfect storm of fashion, sex and marketing which established the definitive return of the Gucci brand. Moreover, he followed up with multiple strong and commercially successful collections thereafter. This said, I’ve always felt that Gucci’s former CEO Domenico De Sole has never been properly credited for his role in the company’s turnaround. The fact is, there would have been no opportunity for Ford to work his particular brand of fashion magic had De Sole not laid the solid foundation for the company’s financial and corporate health. This included cleaning up a myriad of licensing agreements which had contributed to a cheapening of the brand, longstanding tax disputes with Italian authorities that threatened to shut down the business and a labyrinthian corporate structure which had evolved as a result of various factions of the Gucci clan tried to stick it to each other. In reality, Ford and De Sole were very much a team and it was their work in tandem that created the Gucci magic of the mid-nineties. So, with all due respect Mr. Pinault, your comments were somewhat gratuitous under the circumstances. Without Ford and De Sole’s considerable contributions to Gucci, I doubt there would have been much to fight over with LVMH and Mr. Arnault. Perhaps it’s time for everyone to move on now?