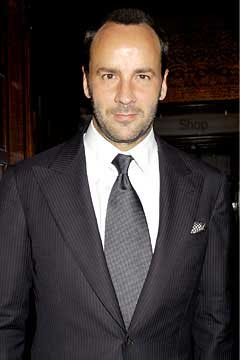 (NEW YORK) Tom Ford’s next big foray: fatherhood? In the spring issue of Fantastic Man (The Gentleman’s Style Journal) on newsstands this week, the designer says that he has everything–the cars, the homes, the wealth, and the lifestyle–except for one thing: “I’m going to have a kid in 2008,” he reveals. “Richard [Buckley] knows I’ve wanted this for a long time. He’s just resisted it. He would be a spectacular father. It’s going to give his life new meaning.”

Pressed on further by writer Stephen Todd, Ford, whose career first began not working for Cathy Hardwick, but, rather, with an internship at Chloé, continues, “It will be biologically mine. I mean, I’m a lot younger. If things follow their natural order he’ll [Richard] probably leave the planet ahead of me and I can’t not have had something I’ve wanted forever. I’ve always wanted kids. I don’t want to get to 75 years old and just have made a lot of dresses, done some houses.”

In the candid Q&A, accompanied by a series of tame–in Ford terms–photographs by Jeff Burton, Ford, who the magazine deems “The Fashion Entrepreneur,” speaks openly and revealingly on a wide array of topics:

-On his days at Gucci: “…having to design 16 collections a year and make a lot of silly stuff I really didn’t care about. Leaving Gucci taught me a lot about who is a real friend and who is a friend for business. The Gucci experience was horrible. I was burnt out from working too hard and I was exhausted from the experience and a certain disillusionment and an inability to see my future. Luckily I had made enough money to not have to work for the rest of my life, and I seriously thought I’d play tennis and golf for the rest of my days. But I got that out of my system.”

-On physical form: “I don’t find the human body offensive. I don’t find a guy’s cock or a woman’s vagina offensive; in fact, I find them beautiful. I would put them on an ad with a perfume bottle if I could get away with it.”

-On retail expansion: “[We’ll have] about 50 stores in the next two years. Except Paris. Paris is not a priority. Our stuff is not aimed at tourists coming in and taking a lot home–and Parisian men don’t know how to dress!”

-On intellect: “No, I wouldn’t say I’m an intellectual. I think I’m intelligent.”

-On sex and childhood: “I didn’t play American football [when I was 12], so I wasn’t so popular. At fourteen or fifteen all of a sudden I became very popular because–and I’m not saying this in an egotistical way–I became good looking. I wasn’t even aware of it but other people were all of a sudden aware that I was handsome. I was having sex with girls when I was 14, and that was because they were pouncing on me. I wasn’t even aware that I preferred men.”

But perhaps, of all the statements made in the piece, his most profound one–which, by making it, puts to rest any thought of him disappearing from fashion’s future–is: “I will not retire until I literally drop dead.”

Tom Ford: You Are Invited James Bond for Tom Ford
Scroll to top