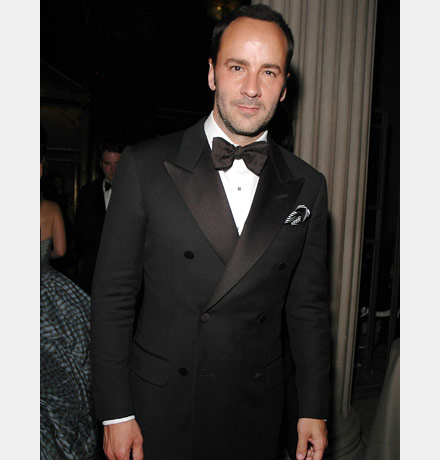 Do you consider yourself an American designer?

I consider myself definitely, I suppose, an American, but I don’t think in terms of European designer or American designer. I think globally. I know it’s the Council of Fashion Designers of America and technically I am American, but I don’t think regionally. The whole time I was at Saint Laurent people would always say to me, ‘oh but you’re an American designer designing for a French company.’ That just never crossed my mind, it didn’t when I worked at Gucci. I think we’re a global world today and I’m afraid that those divisions by nation no longer make any sense in terms of style.

Who are you bringing with you to the awards?

What do you know about your competition, Michael Bastian and Thom Browne?

Well I admire both of them. I don’t know Michael Bastian at all; I do know Thom Browne as a person to say hello to (we’re not best friends). I’m very happy to be in their company.

No, I would never say that! I’ve been around a bit longer and I have a few CFDA Awards, but this is the first time I’ve been nominated for my own company, so it’s especially meaningful for me.

How do you celebrate if you win?

I’m scheduled to be in town only for the CFDA. Immediately following the dinner I am getting on a plane, so that is how I will celebrate. I will have myself a cocktail on a plane [headed to Los Angeles].

Your name and the CFDA haven’t been so closely intertwined despite you having won four awards. Why do you think that is?

I actually feel very American. I grew up here so I feel like an American. It could also be because I haven’t lived in New York since 1989. I have lived in Europe for the last 20 years. I think Marc [Jacobs] has always had a presence in New York and an apartment in New York.

Since this is your first nomination as your own brand, what personal significance does the nomination, and possible win, have on you?

I’m not working within a framework of an existing company any longer. I’m doing something that is purely 100 percent my own taste, my own vision, my own creation from the ground up. It’s great to be even nominated for that. Also, at this stage in my career and in life, having had a lot of success and then having stepped away from the fashion industry for awhile and coming back, it’s really nice to be nominated again because it makes you feel your vision is still resonating with people. It’s a nice stamp of approval to know people are responding to your vision. If I win it will probably mean more to me than some of the other awards that I already have. The first one was very important because the first time you are nominated and win a CFDA Award is great. I’m not saying the other ones were less important, but you become maybe a bit jaded. This one, if I were to win, may be the most important because it’s the first one for my own company. I’m not jaded about this nomination.

Were you surprised you were nominated?

We go to Mustique during Christmas but we usually spend the summers in Santa Fe. And I will probably be doing that this summer because we’re just moving into a new house on our ranch that we’ve been building for a few years. But I’ll also be working most of the summer. I am no longer a completely European company; I can’t take the month of August off.

Well basically I took everything that had Gucci written on it and threw it out. So that’s how it evolved.