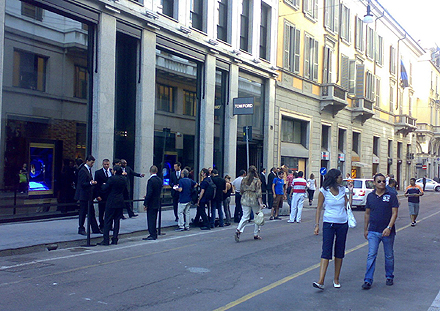 MILAN (Reuters) – Fashion designer Tom Ford’s sales are not feeling the impact of the credit crunch, he told reporters on Monday, as he launched his first directly-owned store in Europe where suits will sell for upwards of $3,800.

“Absolutely not at all,” said Ford, when asked if customers were feeling the pinch.

“Our customers are maybe not buying a house or a Warhol, but they are still buying clothes,” he said, without giving detailed figures. “We are way ahead of our projections.”

Ford set up his own design line in 2005 with Domenico De Sole after the two left Italian fashion house Gucci following a failure to agree contract terms.

The impeccably dressed designer — whose boots alone cost $10,000 — already has a store in New York and more are planned in over a dozen locations including London, Los Angeles and Dubai.

The Milan store is in a clean-lined grey building which was previously home to Ermenegildo Zegna, the self-styled world leader in luxury men’s clothing which has moved further into Milan’s “golden quadrangle” of luxury boutiques.

“It should feel like a house … much more private than a store,” Ford said.

On the top floor are two private salons for clients considering made-to-measure suits, with a terrace and a bar.

One well-advertised customer is Daniel Craig, who wears Tom Ford outfits in the next James Bond movie, “Quantum of Solace.”

“I think Daniel Craig is the best Bond since Sean Connery,” Ford said. “He likes very simple things. It’s hard to get him even to wear diamond cufflinks with a tuxedo.”