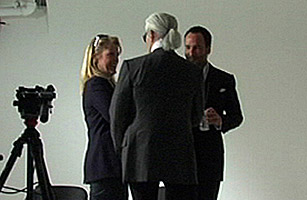 Kate Betts: You have worn many menswear labels over the years — from Yohji Yamamoto to Dior Homme. You are really an expert on this subject. How did you discover Tom Ford’s line?

Karl Lagerfeld: In a very simple way: people told me. First they started telling me about the perfume and the sunglasses, and then when the shop opened, I said, “Let’s have a look.” And it fit! So I thought it was the right moment. I was tired of narrow shoulders and things like this. I suddenly liked this post-Italian updated modern look. Modern because Tom’s clothes have nothing to do with the old clothes. It’s the idea of them. It shares the mood. But in fact they are made differently, and also, in ready-to-wear, this kind of quality didn’t exist. They are beautifully made. They are weightless on the body.

KB: What was the inspiration for the shape of your suits?

TF: They have more of an English cut or line, yet they are made in Italy and made in a very light way. If you wear a real English suit, it will really give you a backache. It looks great, but it’s very stiff in the construction, and it’ll kill your shoulders. We’ve become a little spoiled with menswear in particular because, of course, we’ve come off a period in the ’70s and ’80s when Armani, which is very soft, dominated menswear. And we’ve become obsessed with comfort. I actually don’t like that. I think you should suffer sometimes to be attractive and beautiful, so I cut the clothes very slim because I like to feel the clothes on my body.

KL: And this is the most important part for well-cut clothes. Clothes that follow you.

TF: It’s true. A lot of people think a high armhole is restrictive, but it gives you total movement because it’s cut right up to your arm.

KB: Would you call them English in style?

TF: It’s a hybrid — you know, English, American, Italian, European, international style. The cut is derived more from an English cut but made in an Italian way in the lightness of fabric and construction.

KL: But when you wear them, you don’t feel like they are English clothes because those are heavy. I like that you took that mood and used another technique. It’s like Chanel, which is nothing more than the jacket of people who worked in a hotel where she used to go near Salzburg. She transformed their uniform — with a better cut — into the Chanel jacket.

KL: But if you see those movies with Cary Grant, they are chic, but I am not sure I would like the clothes. I’m not sure I’d like the cut. I’m not sure they would be that great for the average man of the street. For me, American fashion and the look of American elegance with an updated image is Tom. There may be others, but I don’t wear those