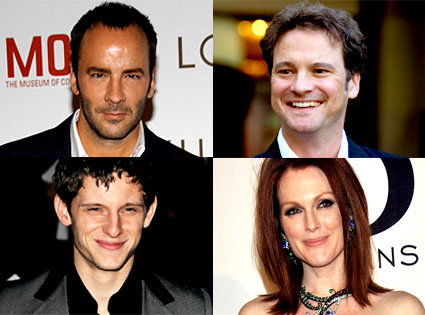 The former Gucci designer is putting the final touches on his directorial debut of the movie adaptation of Christopher Isherwood’s 1964 novel, A Single Man.

Sources reveal exclusively to me that it looks like Colin Firth will star as a gay college professor who deals with the sudden death of his lover. The character is helped in his efforts by a lifelong female friend and one of his students.

Firth’s rep tells me “he’s in discussions” but it’s not a done deal.

Julianne Moore will play the friend while Jamie Bell has signed for the student role, my sources say. The story takes place in 1962 in Los Angeles.

No studio is attached to the project, but Ford plans to begin filming in L.A. in November.

Ford announced in November that he acquired the movie rights to the novel.

The look will be pure Ford. One source says, “It should be very cool with all those ’60s cars and great midcentury homes.”

After leaving Gucci in 2004, Ford spoke publicly about wanting to get into directing.