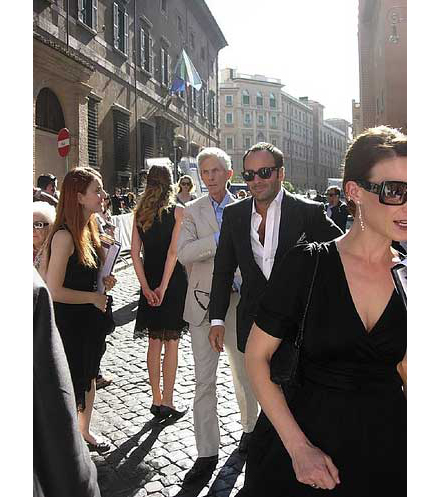 VENICE, Italy — Tom Ford switched from the catwalk to the red carpet on Friday, presenting his directorial debut — an intimate movie about coping with loss and grief — at the Venice Film Festival.

“A Single Man” stars Colin Firth as a college professor coming to grips with solitude after his partner of 16 years dies. Also starring are Matthew Goode, playing the professor’s partner, and Julianne Moore as a longtime friend who harbors an unfulfilled love for Firth’s character.

The movie was the last of 25 films to screen in competition for the Golden Lion, Venice’s top prize. The winners are announced Saturday.

“A Single Man” is based on the book by the same name by Christopher Isherwood. Ford, a former Gucci and Yves Saint Laurent designer, said the film is “the most personal thing” he has ever done.

He said the film is not “about being gay” but rather touches on universal themes.

“It’s really a film about love and isolation that I think all of us feel, so it is very universal,” Ford said at a news conference. “When I see someone who sees the film and says, ‘ It’s a gay story,’ I don’t even know what they are thinking, it just seems to me a human story.”

Ford himself is gay.

“When I was coming to terms with being gay, it’s never anything that was particularly traumatic for me,” he said. “I have been in a relationship with the same person for 23 years.”

The story begins with George (Firth) discovering his partner Jim (Goode) lying dead from an automobile accident. George wakes from what is only a nightmare — only to face the truth that his partner is really gone.

He starts to plan his own suicide, carefully organizing his belongings and visiting his friend Charley (Moore).

“(George) thinks it is the last day of his life, so for the first time in a long time he is seeing, and he is pulled by the beauty of life,” Ford said. He “has a kind of epiphany where he understands what life was about.”

The movie is set in 1962 Los Angeles during the height of the Cuban Missile crisis and the looming nuclear threat. In an apparent nod to his past career, Ford recreates the era with meticulous attention to details and style.

Fashion “is a very fleeting and commercial art,” he said. “This is pure expression.”