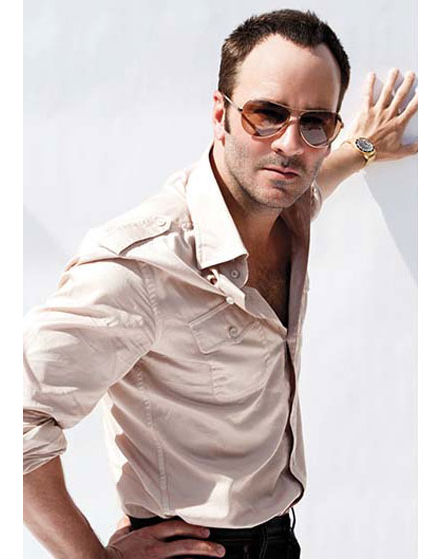 Out: Your first movie turned out to be the toast of the Venice and Toronto film festivals. Is this the start of a second career?

Tom Ford: I certainly hope it’s the start of a parallel career. It was a lot of work when I was both shooting and designing, but if I were only making films, the lag time between different projects would drive me crazy. I’d like to make a movie every two or three years, which is about as quickly as you can get a project off the ground anyway.

How do you think those two sensibilities — fashion and film — come together in the way you approached this movie?

They are very separate things for me. Making this film is the first time in my life that I have been purely expressive or artistic. Fashion, for me, is certainly creative, but it’s ultimately a commercial endeavor.

On paper, certainly, A Single Man sounds like an unlikely project. It’s a story about a middle-aged gay man preparing to take his own life.

Even [my partner] Richard, when he first read what I wanted to do, said, “Are you sure?” I said, “Yes, I’m positive. I have a feeling.”

The focus on love between two men seems so apposite given the debate around gay marriage and the glaring need for better representations of gay relationships.

I didn’t even think about it, but I created the kind of relationship on screen that I have and that [the writer] Christopher Isherwood had with Don Bachardy for 43 years. So it just seemed very natural to me. It was funny to me when one of my agents said, “This is a gay story.” I said, “Really? It is?” I’m just blind to gay/straight at this point in my life. I am gay — I’ve always been completely open about that—but first and foremost I’m human and live the same human condition that every other human on our planet lives. Christopher Isherwood was one of the very first people to treat his gay characters in the same way that he treated the straight characters. They were always just people interacting.

It’s clear that this is a personal movie.

If you read the novel, you can see that I’ve had my character and personality grafted on to the central character of George. The book A Single Man is kind of The Power of Now before The Power of Now was written. And going through a certain midlife crisis of my own — having spent an enormous amount of my life concentrating on the material world — this book spoke to me in my mid-40s in a way that it didn’t speak to me when I read it in my 20s. At this point in time a great message for all of us is to appreciate the small things in our lives and to try to be very present for them, because they are the big things in life — that’s what we get, that’s it.

In contrast to your sexually provocative advertising and Gucci-era persona, A Single Man reveals a deeper, more romantic side that may have escaped people’s notice.

I agree. One thing that most people wouldn’t believe about me is that I’m incredibly shy, and I don’t think I’ve ever allowed people in that close. So the fashion side of me is the surface side, really. It’s also taken a bit of coming to terms with the fact that I do spend so much of my life working in the material world. But as long as you keep it in perspective and don’t take it too seriously, I think fashion is a great thing that adds quality to our lives. It doesn’t mean that a beautiful pair of shoes isn’t still beautiful. But if you lose them, big deal, because they don’t really mean anything other than to be able to say, “Wow, look at my feet. Aren’t they pretty?”

How did your partner react when he saw this movie?

Well, he saw it in many stages. He read every incarnation of the screenplay, he came on the set a few times, he saw the dailies, he saw the first cuts. And I think he loves it. He’s very rarely particularly demonstrative about things I’m working on. Many, many fashion shows where I got great reviews—he didn’t say a word about them. It was almost as if they didn’t exist, and that used to drive me crazy. But he’s been much more vocal about this.

How did you come to choose Nicholas Hoult for the movie?

Originally, I had cast someone else in that role, someone well known, who pulled out at the very last minute. He just didn’t show up at the costume fitting five days before we were due to start shooting. About two weeks earlier, I had received, via e-mail, an audition by Nicholas, who wanted to read for it even though the part was taken. I remember thinking Fuck, he’s so good, he’s so right for this, but the part had already been cast. And then oddly — and this happened a lot with this film — things just moved. Colin Firth wasn’t available originally — I had cast someone else in the role — and we had a shift in schedule, he had a shift in schedule, the other person dropped out, and all of a sudden things lined up. The same thing happened with Nicholas. Now I can’t imagine anybody but Nick in that role.

There’s something very serene about his presence in the movie.

And angelic. And in a way he is a bit of an angel who saves George (Colin Firth). What’s interesting is that Nicholas was 18 when we started filming; Colin was 48. They were exactly the ages of Chris and Don when they met.

A Single Man opens in December.