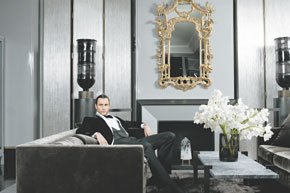 If there were ever a true gathering of fashion’s extended royal family in New York, it happened last night at 845 Madison Avenue at the corner of 70th Street. At precisely 7pm when the guards dressed in black tuxedos locked the front gates, and the light was turned down momentarily, Mr. Tom Ford appeared at the end of the main room of his menswear store, which was decorated with large floral arrangements. About 100 top tier international editors and journalists sat anxiously after a long wait–six years–for his return to womenswear.

“Richard (Buckley) knows that for years when I was at Gucci and Yves Saint Lauren, I had a recurrent nightmare and it would last for a week before the show that the clothes would not arrive, that something went wrong, that the atelier burn down and that I had to stand up in front of all of you and talk for 20 minutes. It’s a tough crowd! I am happy to say that tonight I am very proud. We have, I think, wonderful clothes to show you and we also have I think many of the women–the most inspirational women–to model for us. So I’d like to present to you now my Spring 2011 ’Women’ collection,” said Ford just prior to narrating his entire show, describing each of the models and the specific look they were wearing. And the most fabulous women they sure were.

Click play above to hear Long’s audio recording from the show.

“Ladies and Gentlemen. Miss …” was the introduction Tom gave to each look by calling each model by name. There was off course the most talked about Beyoncé Knowles, who teased the crowd in a short midnight blue and silver all sequined dress; Julianne Moore and Karen Elson (whose album “The Ghost Who Walks” was part of the soundtrack) in a charcoal and navy dress with dangling fringes respectively; Emmanuelle Seigner in a tight cut black wool jacket worn open with slim pants and crocodile sling-backs; Lou Doillon in classic black tuxedo; Lauren Hutton in a white silk trouser suit with fedora; Natalia Vodianova in a silk georgette dress; Rinko Kikuchi in a silk tulle and georgette cocktail dress; The Honorable Daphne Guinness in a leopard print dress with her own platinum and diamond jewels; and Julia Reston Roitfeld in a black leather bomber and hand stitched leather skirt. And this wasn’t all–there were also Rachel Feinstein, Lisa Eisner, Stella Tenant, Farida Khelfa, Rita Wilson, DuJuan, Victoria Fernandez, Marisa Berenson, and Chanel Iman. Different types of women but each wore the perfect outfit.

But when Amber Valletta emerged from behind the curtain wearing a print single-breasted suit with a black chiffon blouse, unbuttoned to her navel, there was a momentary gasp of silence. At that instant, her allure and the way the suit envelope her silhouette stopped time for a few seconds. Surely this collection heralds a return to elegance and a move away from the current minimalist chic. And it will be available at Tom Ford stores worldwide towards the end of January.

Fashion has the power to transform, but so few designers can marshall this power the way Mr. Ford did last evening. Ford somehow knew that it was time to turn the page on the current obsession with fast fashion, and to return to what he has always known and proposed–that detailed, well-cut clothes in sumptuous fabrics can bring fashion to a different realm. He banned photographers and asked attendees to restrain from taking pictures. Sadly, many of the editors were still busy tweeting away instead of savoring the magnificent fashion moment taking place in front of them.

When I left the show, I kept thinking about the images of the Jamaican runner Usain Bolt at the Olympic games 100 meters dash final. In a record setting time, Mr. Bolt was so far ahead of the crowd that he had to turn his head back to verify that he was still in a race. I think after a six-year wait, Mr. Ford can now sit tight. If he looks behind him, he probably won’t see any competition.

Click play above to hear Long’s audio recording from the show.

Source : Fashionista.com , Thanks to Fashionista contributor Long Nguyen is the co-founder/style director of Flaunt.

The Reality Of His Clothing 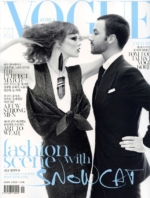