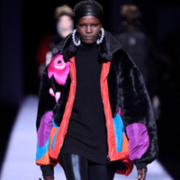 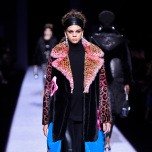 Such is an element of Ford’s newfound prescription for dressing by day: the “potent piece” integrated with basics, an approach informed, he has said, by mingling with school moms during drop-off. Suffice to say, that must be some school parking lot. These days, Ford’s mad for leggings, but there are leggings and leggings. His favorites: liquid metallic and flashy animal spots.

In fact, though tempering his use of fur, Ford loves an animalia motif — zebra, snake and spots galore, shown with dizzying fortitude, from his take on discretion, the all-black, high-sparkle look that opened the show, to head-to-toe color — tailored suits in acid green and red; an acid yellow mini shift and frilled dresses in purple, red and yellow, all over coordinating tights. There were calmer moments, too — if one can call a racy black jumpsuit with cutout midsection calm (yes, it harkened indirectly to a white jersey Milanese ancestor). Might this have been one of the looks Ford referred to last week, when, voicing frustration with the state of the red carpet, he said, “There’s some things in my women’s show…and I thought, ‘If someone had the guts, this is what they should wear on the red carpet.’” If so — agreed. Then there were the coats. These were fabulous, both chic shearlings with jeweled buttons and everything-but-the-kitchen-sink collaged wonders that worked an off-beat, tricked-out practicality. Potent indeed.