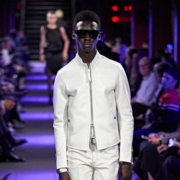 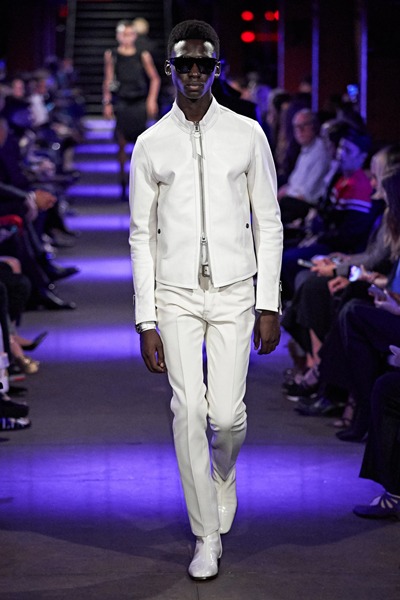 How many times have you heard that the streets of New York are a runway? Well, the same is true of the subway, only maybe more so. There’s glamour and grit down there, same as above ground, but down below there’s a captive audience.

Tom Ford is the new chairman of the CFDA, and after starting in June his first move was to shorten New York Fashion Week. Simultaneous with the consolidation, designers have been producing more experiential events. We’ve seen bands, modern dancers, and a 75-person choir this week, but only Ford arranged for a private viewing of a disused platform of the Bowery stop on the J/Z line lit an electric pink for the occasion. Many of his 180 guests were surely subway first-timers, but the regular commuters got a big kick out of it too.

What is Mr. Slick doing in the subway? Ford’s notes made mention of the famous shot of Andy Warhol and Edie Sedgwick emerging out of a manhole cover. The subway also jibes with his new-since-last-season interest in simplicity. “I think that it’s a time for ease,” he wrote, “and in that way a return to the kind of luxurious sportswear that America has become known for all over the world.”

Enter look one: a jersey scoop-neck tee with the short sleeves rolled up to the shoulders and a duchesse satin skirt so white it was beaming. Not exactly subway-safe, it was low-key fabulous and synthesized the compelling high-low essence of the collection. Or consider another example: satin blazers cut characteristically strong and worn with elastic-waist nylon basketball shorts. “These torture me,” Ford wrote of the shorts, pointing out that he doesn’t let his son Jack wear them, even though his classmates do. “I’m always fascinated by things that ‘torture me.’” Ford didn’t play it completely contrary, though. The molded plastic tops were a luscious homage to Yves Saint Laurent’s Lalanne breastplates via Issey Miyake. And Ford’s tailored men’s jackets were typically loud and louche.

Connecting with one of the key messages of the season so far—let’s call it the nearly naked trend, for now—Ford threw a dress coat over a leather bra, cut a jumpsuit so it fell open to expose a strappy bikini top, and sent out a pair of slinky maillots. Of course, the millennial designers doing the same have probably been studying Ford’s old Gucci shows. That legacy of great American sportswear Ford was talking about? He has a stake in it. What’s new is old, that’s just how fashion works. Credit Ford, he’s expanding his vocabulary. 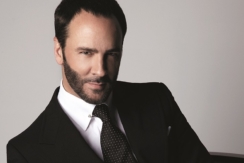