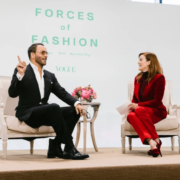 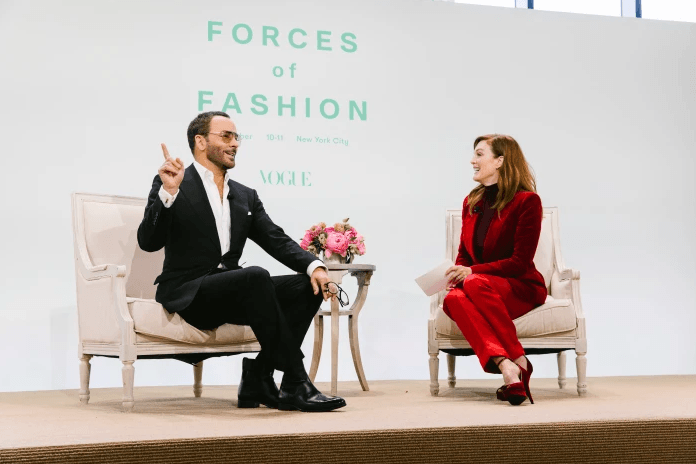 Tom Ford gets nervous. One wouldn’t guess that based on any number of interviews published about the designer, who is so often shrouded in a figurative cloak of sensuality and sophistication that probably smells “fucking fabulous.”

But the award-winning designer, movie director, and Council of Fashion Designers’ chairman admitted as much during Vogue’s Forces of Fashion conference in Manhattan on Oct. 10.

“We’re both products; you and I are products,” Ford says, referring to his interviewer, actress and muse Julianne Moore. “So you start to learn the billboard version of yourself, and because that’s what you’re selling, now it’s a part of you. It’s not that it’s a fake creation — if it is fake, it doesn’t resonate or speak to people — but it does become a kind of billboard version of yourself. I’m always nervous when I meet someone that I’m not going to live up to the billboard idea of whatever it is they’re expecting.”

It’s an admission that comes in conversation with Moore, during which they both ponder the existential dilemma of reconciling your online persona with reality.

“People often just dress for their Instagram,” says Ford. “Things that photograph well on Instagram can maybe, in real life, look a bit silly…in a way, that has caused us to look slightly cartoon-like, because you need that graphic quality of something that will read as an image. It’s fascinating how, less and less, we react to each other in real life and more virtually.”

“I am exhausted by Instagram, personally,” Moore says, to which Ford adds: “Instagram leaves you feeling ugly, fat, inadequate, dull, pathetic, friendless, sad and makes you want to just jump off a building.” (Not the kind of opener that following interviewer Eva Chen, head of fashion partnerships at Instagram, might have asked for.)

Moore, for her part, is an apt interviewer given the topic at hand: Both film and fashion offer mirrored looks at the current culture with which we collectively interact, while also being subject to social media platforms which can elevate a designer or actress’s global profile or bury it. Will a film be successful if its trailer doesn’t hit the trending page on YouTube? Could an actor’s viral tweet make or break opening weekend? And on the fashion side, is a collection at the mercy of the instantaneous, and often merciless, Instagram review?

It’s a relevant topic, though not the only one “new statesman” Ford, as Vogue calls him, ponders during the conference. Since his peers voted him as CFDA chairman earlier this year, Ford has instituted a handful of notable changes which seek to satisfy his goals to reassert American fashion’s relevance on the global stage. He consolidated the official CFDA New York Fashion Week schedule to five days in an effort to accommodate industry insiders and buyers who might have skipped New York to both conserve their own energy as well as attend more shows in London, which follows New York on the fashion month calendar; In September, Ford welcomed four new board members, those who both actively embrace and represent a diverse industry perspective; and in the works is a non-designer advisory board Ford is building.

Aside from social media, Ford and Moore discussed other topical subjects, like the permanence — and impermanence — of clothing today. Moore says that she’s resolved to stop shopping for at least a year, in an effort to recalibrate how she thinks about consumption and reevaluate the stuff she already owns, a resolution seemingly at odds with the social media consumption machine that unofficially necessitates that each new post requires a new outfit.

Ford hasn’t gone so far as to stop shopping, but he is acutely aware of the problem that disposable clothing and fast fashion presents, whether from a social or ecological standpoint.

“I received an award a few years ago in Milan from a foundation that Livia Firth is involved in, which is about sustainability in fashion, because my clothes are so expensive people don’t throw them away. They auction them or sell them — that was kind of a joke,” Ford says to laughter from the audience.

“First of all, everything I make is made in Italy. The workers are incredibly well cared for, taken care of, well paid…and the clothes are really not meant to be thrown away,” he explains. “They are expensive but the workmanship demands it. They are not artificially expensive; it’s how much it costs to put 35 hours of hand workmanship into a jacket. They are meant to be handed down, be sold — they are not meant to be thrown away.” All of which is to say: You can archive your Instagram posts with little consequence, but discarding your clothes carelessly is a higher stakes behavior.

As for where fashion is going now? “God knows,” Ford says. And if not God, at least the CFDA has its new chairman.

Tom Ford Wants You to Dance in Your Suit